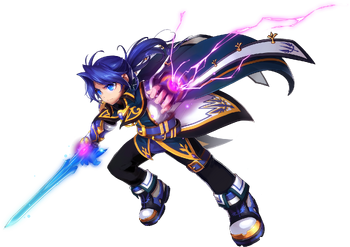 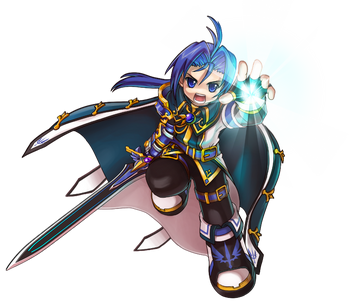 Ronan, a descendant of the highest house of Magic Swordsmen in Kanavan, the House of Erudon, has received the highest praise and glory in the war against Kaze'aze.

However, great evil has taken hold over the Bermesiah Continent once again, and as an unknown, mysterious new continent appears, Ronan is once again thrust headlong into a perilous situation. Throughout the ongoing melee, Ronan relied upon the strength of his pedigree but just when he thought he had reached his limit a mysterious guardian of chaos was summoned by the House of Erudon and instructed to deliver a forbidden magical weapon to Ronan. This weapon was none other than the Tyrfing, a sword of immense power that can only be held with magical gloves.

The Tyrfing is a cursed blade that amplifies the powers of a swordsman when his powers are at their weakest. The amplification comes at a cost though. Rather than simply allowing anyone to wield the blade without regard to safety, the blade feeds on its wielder’s life. Anyone not ready to wield a Tyrfing will soon regret ever picking up the blade.

Ronan, who had trained hard and freed the continent from the grasp of evil, has attained the rank of the strongest class of the Magic Swordsmen, Abyss Knight, and is stepping forward to end the chaos of the new continent.

An Abyss Knight is a member of the strongest class of Magic Swordsmen. The Abyss Knight wields the Tyrfing, a weapon which amplifies the Magic Swordsman's skills, and wears a glove with a magic orb to amplify his magical abilities. With a more developed sense of restraint and connected magic he can actively release his attacks with terminal precision. The result of this amplified magic is a combo that can still incorporate varied and powerful magic which increases the charge and destructive power of the Magic Swordsman's skills.

On a basic level the Abyss Knight can only fight 1:1 or only against a small number of enemies, but since he makes use of different battle styles, he can gather his opponents in one spot with his magic and summon a Valkyrie to defeat all of them in one single strike.

And if the strategy described above fails, an Abyss Knight can release the powers of Erudon's Tryfing, granting him an aura around that punishes all the opponents who try to corner him by raining massive amounts of ethereal swords on them.

"To you who will have to make it through the world's chaos, another trial awaits. However, do not be afraid. By testing your limits and the dimensions of your growth you will be even more prepared."

"I have been watching over your activities up until now. As expected, you have proven to be the best of the knights born into Kanavan and the House of Erudon. I will give you the strength to overcome this task."

"You, the strongest Magic Swordsman, are the closest to becoming an Abyss Knight. This is the fate you have been given. In the name of the Abyss, punish all evil." 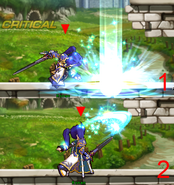 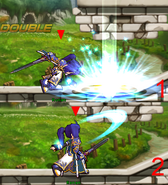 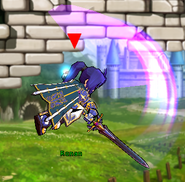 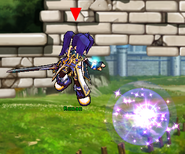 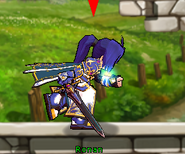 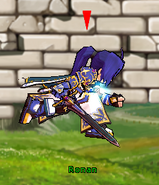 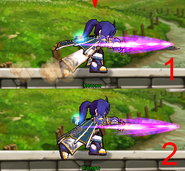 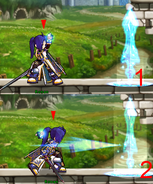 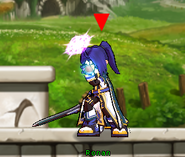 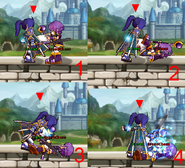 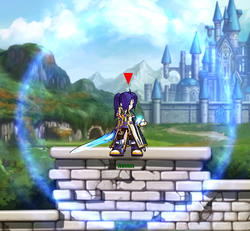 Abyss Knight's rune gauge fills itself slowly over time. Once the rune bar is completely filled, Ronan can summon Erudon's Tyrfing by pressing

. While Erudon's Tyrfing is active, Ronan retains all of his specials and his basic moveset, yet gains a 10% attack boost, an aura around him raining ethereal swords that strike opponents inside the aura at random intervals, in a similiar way to Hell Spears, and his eyes will turn into a bright skyblue. Once the gauge is emptied, the Tyrfing will disappear. Using a special will temporarily freeze the rune bar, but it will stop the ethereal swords from raining on the opponents as well. Pressing

again will remove the aura immediately. 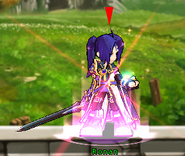 Erudon's Tyrfing Removal
Add a photo to this gallery 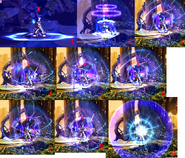 Tempest Blade
Add a photo to this gallery

Heaven's Guardian
Add a photo to this gallery

Retrieved from "https://grandchase.fandom.com/wiki/Abyss_Knight?oldid=59163"
Community content is available under CC-BY-SA unless otherwise noted.