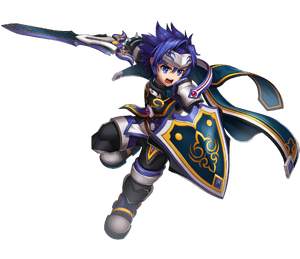 A very traditional knighthood, the Aegis Knights have been the strongest defense for the Kanavan Kingdom since ancient times; their swords and shields have always stood stalwart to defend the kingdom.

The Aegis Knights call themselves the Absolute Shield. With their renowned skills in battle, they are the greatest defenders of the Kingdom.

Aegis Knights fight with a Sword and a Shield. While some might consider this less efficient for slaying foes, the Aegis Knights have proven that not many can match their skills in combat.

After the invasion and repeated attacks that followed from Kaze'aze, the Aegis Knights, stalwart as they were, faced annihilation. It was Ronan, who emerged from the ranks to lead the Aegis Knights forward and rallied their strength against the tide of dark forces that sought to break upon the Kanavan Kingdom.

With his new-found powers wielding the Sword and Shield along with his white magic, Ronan has become not only the guardian of the royal family, but the bulwark of Kanavan. He is the Kingdom's only hope of defense and survival.

Using a shield, Aegis Knights can quickly attack and quickly defend with the shield so that they can carefully guard themselves while choosing their next move. Blocking is, initially, difficult to time and coordinate, but once mastered enemies will have no hope of ever hurting an Aegis Knight. The proper use of defense while mixed with offense will make Aegis Knights formidable opponents on the battlefield.

Thanks to the new Erudon Weapons, Aegis Knight further boasts his invincibility by summoning Erudon's Shield, which renders him and his teammates completely immune to any damage for the duration of the shield. 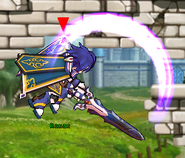 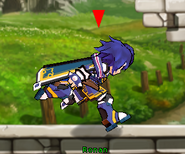 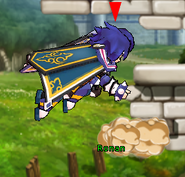 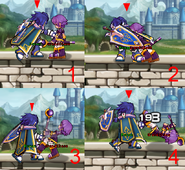 Aegis Knight's rune gauge fills itself slowly over time or by performing basic attacks except the basic combo (dungeons). Once the rune bar is completely filled, Ronan can summon Erudon's Shield by pressing

. Contrary to the other three Erudon Weapons, the shield can be utilized in two different ways: 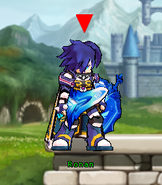 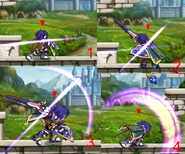 Arc Breath
Add a photo to this gallery 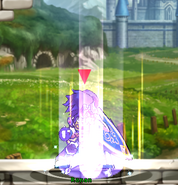 Tempest Slayer
Add a photo to this gallery

Retrieved from "https://grandchase.fandom.com/wiki/Aegis_Knight?oldid=59077"
Community content is available under CC-BY-SA unless otherwise noted.