Alfred is one of Dio's two butlers, the other being Sebastian .

There is nothing else known about Alfred other than that he appears to be extremely loyal to Dio but does show a bit of concern at times.

Dio sensed a change approaching and demanded Alfred that they leave the dimension they were sealed in, much to his concern. Eventually, he obeyed his young master and prepared for their departure.

Alfred asked his master if he was going to push through in rescuing someone despite the factions involved, likely referring to Veigas Terre.

As they planned on how to get out of the Crimson River Mansion after more Hardliners were alerted, Alfred, approached the Grand Chase to offer his assistance.

Ley wondered why Alfred was alone to which the butler responded that his master had attended to an important matter and that someone who would explain it further was waiting across the Crimson River.

Alfred answered Ryan that when Heitaros was injured and became powerless 2,000 years ago, Veigas executed his followers which the butler believed was the Demon God's reason in attacking the new leader of the Hardliners.

Alfred had reminded the Grand Chase of the important person waiting across the river and urged them to hurry before the enemy's reinforcement arrived.

Alfred feared the arrival of enemy reinforcement after Mari took notice of the sun rising and that they must cross the bridge very soon or the Hardliners would easily track them.

Dr. Oz eventually came to rescue them in the nick of time much to the butler's relief.

When demanded about the current situation of the Demon World, Alfred claimed that the power Heitaros recovered from Ashtaroth's energy was not enough to take on Veigas and his army, therefore, he orchestrated Veigas' expedition to Aernas in the guise of the Creator. The butler also informed Ley that Dio headed for Purgatory, however, he clarified that his priority was Veigas though not without reassuring that his master would also save Peter von Crimson River. Despite not being too certain about the odds, Alfred added that he was told by Dio of a skilled Gladiator he found.

Act 16.8: The Demon God and the Four Demon Kings

Alfred explained to Jin that the "Demon God" and the "Four Demon Kings" were titles created during the Ancient War that just stuck with the five strongest beings in the Demon World making Heitaros who ended Duel the Demon God and the rest were named the Demon Kings.

Epilogue 4.1: The Labyrinth of the Purgatory

Dio told Sieghart that Alfred had prepared a device for them so that they would not be doomed to aimlessly wander around the Labyrinth of the Purgatory forever.

Alfred delivered a message to Dr. Oz from his master. Then he announced that demons released from the Purgatory would return to their land and fight against the New Hardliners while Dio was going to reclaim the Burning Canyon territory and would move simultaneously with them.

As Kyle and Cindy pointed out the reddish woodlands of Eternal Valley, Alfred said that the Burning Canyon's name was derived from these, and from afar, they looked like they were on fire. Further, into the trail, the butler corrected Lass that the "dangerous monsters" he thought might be living there were the traces of battle still left because of the special power by the demon sword Eclipse as the Demon World's best swordsmen, Burning Canyon's head Werner and the Ancient Demon Duel, fought in the very same forest. However, he made it clear that there were monsters that came because they were attracted to that energy.

With the Grand Chase still in awe of the traces of battle everywhere, Alfred attested to how powerful Werner was although he was no match to Duel whose sword pierced through his heart. The butler believed that Dio did not want revenge because the young master thought his father was not killed but rather had thrown his life away.

Act 17.4: Through the Darkness of Night

Despite Jin protesting that they rest a little bit after Amy had a minor injury as the sun was down, Alfred pressed everyone to hang in there. He claimed that Dio probably left before contacting him and that they must hurry in joining his master.

Along the way, the group encountered some enemy reinforcement that seemed involved in a peculiar device which Alfred thought was weird at a late hour.

When Ronan inquired if there was an area in Burning Canyon where they did not reach yet, Alfred told them about the Abyss of Demon World below the valley and described how it touched the Underworld and was the last stop for the Underworld Train.

As Arme worried that Carnero might send back support troops after running away in defeat, Alfred proposed to guide them into the Burning Canyon's underground cemetery where they would not be meeting the enemies.

Alfred showed the cemetery where they buried Burning Canyon's family but it turned out to be full of Undead creatures much to the butler's confusion.

Noticing the nice-looking coffin, Alfred claimed that coffins for the head of the family usually looked like that. However, he clarified that Werner's was buried way deeper than the coffin they saw and that it belonged to a guy from about 340,000 years ago.

Alfred revealed on their way to Werner's grave that the reason his master never visited after the Burning Canyon head was laid to rest because he felt betrayed that his father whom he respected made such a cowardly move to end the war against Duel.

Alfred reassured the Grand Chase that sneaking into the top of the castle wall was the right decision since the siege weapons were meant to fight enemies that were below the wall and so there would be no reason for them to lose against the large number of guards occupying the Burning Canyon's Mansion which was built on a valley.

The group reached the entrance of the castle and Alfred informed them that there was no other way for the troops to keep reinforcing other than going through it.

Alfred appeared in a cutscene that took a peek at Dio's past. He was seen handing over the weapon Death Star from Werner to his young master.

After successfully reclaiming the Burning Canyon from Yohanna, Dio hinted at Alfred to clean all the mess with the butler complying wholeheartedly.

Alfred promised to protect the mansion after Dio expressed his worry about leaving the territory that he just regained. 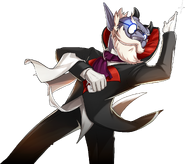