Anmon Guards appear in numerous places in three different forms, normal, Elite, and Dark. They carry a hammer, which they use to attack with. They originally guardians of Bermesiah, and then corrupted by Kaze'aze.

The Anmon Guard has four attacks. One is where it swings its hammer twice, knocking the player over with the second hit. Another is where it raises its hammer up, pauses, then slams it down, creating a small quake, knocking nearby grounded players in the air, causing damage when the players land on the floor. The third is where the Guard moves forward a good distance, while spinning with its hammer, knocking into players in its path. The fourth is when the Anmon Guard has been knocked over. It sometimes jumps off from the ground and onto its feet, slamming its hammer into the ground, similar to the second attack. 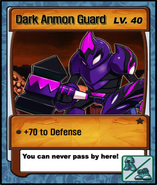 Add a photo to this gallery
Retrieved from "https://grandchase.fandom.com/wiki/Anmon_Guard?oldid=35035"
Community content is available under CC-BY-SA unless otherwise noted.