Princess Anyumena was born on the same date and time as Princess Enaruv and Karina of the Erudon family. As part of an exchange training, she and Karina traveled together to the Serdin Kingdom and met Enaruv. They all participated in the training and became close friends.

On their way back to Kanavan after the exchange training, they ran into Ashtaroth who had quickly disposed of the royal families that had traveled with them.

Years later, Princess Anyumena ascended the throne as Queen Kanavan and appointed Ronan Erudon as the commander of the Royal Guard. However, she would be possessed and used by Kaze'aze to wage war against Serdin for five years.

When Queen Kanavan was sent on the battlefield, Queen Serdin took advantage of the opportunity and placed an awakening spell on her. Regaining her true personality, the Queen snuck back to the castle and freed Ronan from the same enchantment. Then she tasked him with spying on hidden monster soldiers and also sent a letter to Elscud devising the Kanavan Trackers.

When Kaze'aze realized her plans had been discovered, Queen Kanavan was placed upon an even more powerful enchantment and her personality had been sealed perfectly.

Anyumena during the Kingdom Wars. 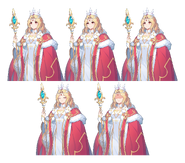