Dwarven King Arawn is the ruler of Thunder Hammer and ultimately the king of the Dwarves in Archimedia.

There is nothing else known about Arawn other than his sovereignty in the Dwarven capital of Thunder Hammer.

As the Grand Chase attempt to clear their names, Arawn declines it with a challenge. Before doing so, he compliments that they are not without ability seeing how they managed against his forces.

After they defeat him, his scouts report that one of their cities was destroyed by attacking demons while Mari explains her story. Arawn believes that there is no evidence of their stories, but agrees to let them go. However, he warns them that they will be watched so long as they remain in his land.

Arawn reappears along with Gilberta to help hold off Veron and Drawl as the Chase make their way to confront Ashtaroth.

Arawn can use powerful hammer swings. He can also create three fire pillars on each side of him and can slam a golden lightning hammer directly on top of players, leaving a small DoT effect. When he jumps, he produces a small shockwave to those nearby.

Arawn has two Thunder Hammer Defenders guarding him and will create any replacements if possible. He is also summoned throughout Boss Gates in Archimedia. 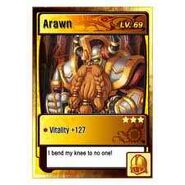 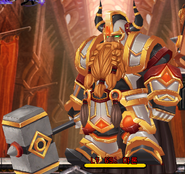 Arawn in Grand Chase.
Add a photo to this gallery

Retrieved from "https://grandchase.fandom.com/wiki/Arawn?oldid=76369"
Community content is available under CC-BY-SA unless otherwise noted.