Ashtaroth is the primary antagonist in the game having engineered various events that ultimately created the ill-fated events in Aernas and had led to the creation of Grand Chase.

He was originally a shrine guardian from Xenia until Baldinar took over his body.

Nothing much was known about the original Ashtaroth other than serving as Thanatos' right-hand man in the Fortress of Ascension. When the gods of Xenia started losing their sanity, Baldinar took advantage of the confusion and stole Ashtaroth's soul, taking over his body.

When Sieghart accidentally left traces of the Highlanders' training grounds after being saved, Ashtaroth found them and eliminated everyone except for Sieghart who was not present at that time. Then he put a barrier that prevented anyone from leaving the ruins.

Sometime before the five-year war between the Kanavan and Serdin kingdoms, Ashtaroth had been investigating Bermesiah when Karina Erudon and the princesses ran into him at the Gorge of Oath. He massacred several royal families and put Karina under a demonization spell as she defended the two princesses which led to her being ruled as the main culprit of the genocide and banished from Kanavan for all eternity, causing her to grow hatred for humans. Ashtaroth then appealed to Karina and taught her how to harness dark magic, changing her into the demonic monster known as Kaze'aze.

Ashtaroth attempted to get rid of the "worms" that meddled with his god. Intercepted by Vanessa, he attempted to stop them with his familiar Mynos. This failed and he left while stating that he will observe their next movements. Although Amy got infuriated as he was "spying" on them, Vanessa argued that Ashtaroth was just being cautious though he was supposed to guard his master's temple.

After defeating Thanatos, Ashtaroth appeared to take his Orb of Ascendancy and fled to Archimedia. Before he left, he realized that Sieghart and Mari are the two last survivors of Kounat and mentioned that all Highlanders were exterminated by his own hands.

Duel stole the Deity Orbs and brought them to Ashtaroth. At the same time, Ashtaroth used the Orb of Ascendancy to unseal demons. Mari who had most of her memories returned shortly after that point theorized that Ashtaroth is using the Deity Orbs to recreate the Soul Stone.

Sometime after Relics of Kounat, Kassias Grandiel warped the Grand Chase to his labyrinth and had them battle more powerful versions of every single enemy they had faced in the past to prepare against Ashtaroth.

Ashtaroth appeared once again to attack the Grand Chase with his newly formed Soul Stone and claimed that he used it against the Existor and the Violet Mage Guild to "test" its power, much to Ronan and Arme's dismay. He managed to fatally wound Harpe who sacrificed himself to shield Ronan from an attack. As he was about to finish off the group, Grandiel appeared and told the Grand Chase to enter a Dimensional Portal that will lead to the Monster Train 301 to save Harpe's soul while attempting to hold off Ashtaroth.

The special force leader Dahlia claimed that she is an ally of Ashtaroth. Before she fled, Dahlia revealed to have been delaying the Grand Chase so that Ashtaroth can continue with his plans.

It was said that Ashtaroth is planning to use the Aernas Hammer once again to annihilate the world and recreate it in his image to gain power that rivals gods. When the Grand Chase arrived to assist the dark elf queen Gilberta in defeating Quoronnos, she told them his goal and lent the Chase their airship to reach Kounat's capital where Ashtaroth lies.

Ashtaroth appeared after the Grand Chase defeated Dahlia, deeming that she no longer has usefulness and kills her. He then summoned the Highlander's Relics and Graham's Relics before departing which Sieghart recognized as his comrades. After Grandiel defeated Graham with the Klara Libri's clone, he revealed Ashtaroth's plan but Sieghart notes that the weapon cannot be used without its key.

The Chase finally confronted Ashtaroth in a battle and defeated his enhanced human form as well as his transformation into a demon. Grandiel appeared and tried to convince his old friend to stop but Ashtaroth ignored him and used the power from the Aernas Hammer to transform into a god-like entity. He warned that the Grand Chase's attacks are futile but so long as Ashtaroth does not possess the key to the Aernas Hammer, the Klara Libri's clone can defeat him.

Ashtaroth also inadvertently created and freed the newly born Uno from the remains of the Highlanders. The barrier that he placed around the ruins faded away with his demise, allowing the creature to roam the world.

Ashtaroth's attacks are mostly a mix of swordplay and magic, most of which resembling Ronan's. His basic combo similar to Spell Knight's Giga Crash traps players and ends with a small burst of magic. He can also shoot out a small dark ball of energy that shoots out in a straight line and disappears off the edge of a stage if it does not hit a player, mirroring Spell Knight's Lunatic Force but is much faster and does not freeze. He lets out a small chuckle and lifts his arm before the move executes, allowing players to try and get out of the way. When attacked upfront, Ashtaroth may decide to block the damage and counterattack with a short-ranged purple flame. Ashtaroth can also use an attack similar to the Spell Knight's Kanavan Strike but with a much wider range. It should be noted that the range of this attack is much wider in the direction that Ashtaroth is facing so moving behind Ashtaroth to dodge this move is helpful. Sometimes when he jumps in the air or is knocked airborne, he does a downward dive attack that knockdowns targets in his way.

Once the players bring his HP down halfway, he uses an attack similar to the Battle Mage's Deep Impact that doesn't hurt the players as it is part of a cutscene. He does use this move occasionally in the next room as he is a part of the battle, hanging in the top right of the stage. However, he is intangible during this phase. Any buff of Ashtaroth transfers into his meteors as well.

He can hurt players with the mentioned skill during the boss battle denoted with a DANGER warning and if he has a special status (petrify, freezing, etc.) it can affect the players if they are hit. When the warning comes, players then must hide in the very bottom left corner of the stage near Vanessa or they can die.

The Ashtaroth fought in Valstrath can be summoned from Xenia's Boss Gate and players are now able to defeat him. Ashtaroth's move set is the same as his encounter in Valstrath along with two new attacks and a far more aggressive playstyle. He now has a recovery attack similar to Magnus Dan's Turning Breaker when knocked down. Whenever he jumps in mid-air, he may perform a sword swing as his jump attack or his dive attack when players are in range.

His self-proclaimed "true form" appears many times as large than his previous appearances and is armed with a massive sword. Unlike his previous encounter, Ashtaroth's attacks have become modified with strength and range albeit far less agile than before.

Ashtaroth attacks are upgraded versions of his regular attacks. The sword and magic combo creates flames when attacking with the sword and finishes with a dark sphere similar to Thanatos' attack, dealing way more damage but is very clunky and slow. Ashtaroth may also attack with an upgraded version of Spell Knight's Kanavan Strike, summoning larger swords and employing them in full-map range. The swords can appear anywhere and at a random but set pattern. When the JUMP warning appears, he will deal with a heavy attack with his sword slamming the ground that causes 3 fiery shockwaves. Players will also be damaged if they are hit by his sword. Ashtaroth will occasionally banish his sword to use a technique similar to Prime Knight's Birth of Blades, summoning red lasers that home in on the player's location. Following the laser's trajectory, swords will fall from the sky and impale the ground, damaging and stun-locking players who are hit.

Using the power of the Aernas Hammer, Ashtaroth turns into a large colossal demon with cracks of lava flowing around his body, towering over the entire battlefield.

Demon Ashtaroth attacks by firing a laser from one end of the map to the other from his head, creating many explosions that leave behind stray flames. When the JUMP warning appears, Ashtaroth will slam the ground with his hand followed by a fierce blow towards the player depending on which hand he uses. If he attacks with the right hand, his blow will hit all players on the upper platforms. If he attacks with his left hand, he will damage the players on the lower ones. At one point, Ashtaroth will be outraged and the JUMP warning will appear before he slams the ground with both hands, causing large flame pillars to burst from the ground at a random but set pattern.

The only way to deal with damage to Demon Ashtaroth is by hitting his head or his chest.

Employing the full power of the Aernas Hammer, Ashtaroth once again transforms into a god-like entity with seraph wings hovering around him.

Ashtaroth will summon 2 halos in front of him that will fire lightning bolts forewarned by a small beam of electric charge. When Ashtaroth creates a black and yellow orb, he will summon a vortex that will pull in players which will instantly kill them if they are caught in it. If the same orb is summoned above Ashtaroth's head, he will call upon meteors to bombard the map, dealing high damage if they hit the player. When Ashtaroth starts flying, he will surround himself with his wings and use all of his attacks simultaneously. At this point, Grandiel will summon a blue-colored barrier over his vicinity causing all of Ashtaroth's damage to "miss". Finally, three of Highlander's Illusions will spawn at a time and will be replaced once they are killed. The illusions will prioritize attacking Kassias to halt his charging.

God Ashtaroth cannot be damaged except with the Klara Libri used by Kassias Grandiel. Any other attacks dealt with Ashtaroth will do no damage and display a "miss". For Grandiel to attack Ashtaroth, the player needs to fill a gauge that will appear under Grandiel by waiting it out by approximately a minute or killing the Highlander's Illusions that Ashtaroth summons in which Grandiel will fire a homing orb that does a fair amount of damage to Ashtaroth's health. If the Drama Cube behind Ashtaroth is destroyed, Grandiel's charging speed will double, effectively lowering the time to 30 seconds. This part of the battle is merely a test of patience and survival.

Kassias Grandiel is stationary on the left side of the map and takes no damage at all. However, if he gets attacked, Kassias' gauge charging will briefly halt. Likewise, Ashtaroth always stays at the very center of the area. 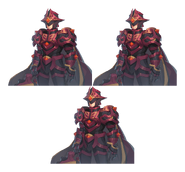 Retrieved from "https://grandchase.fandom.com/wiki/Ashtaroth?oldid=78074"
Community content is available under CC-BY-SA unless otherwise noted.