"The Blue Fox of Kanavan."

Somewhere in Silver Land was the story of a young man named Jin who dedicated himself to the Silver Knights led by Victor and a martial arts expert named Asin Tairin. Jin learned martial arts with diligence and enterprise. But one day, Victor suddenly disappeared and the Silver Knights were attacked by hundreds of powerful monsters. Victor had betrayed his Silver Knights to the Ascendant God and now lead the army of Black Knights against them.

Asin quickly forced his favorite student to run away. After the initial battle, both thought that the other had been exterminated and mourned their loss. However, Asin barely managed to escape into a forest badly wounded. There a purple-haired boy found him. Feeling pity for the wounded man, he tended to him and healed his injuries.

Feeling hopeless yet grateful, Asin returned the favor by teaching the boy everything he knew of martial arts. The boy learned quickly, delighted with the teachings and the power that accompanied them. However, this also gave him a sense of power and he often dreamed of making the humans that caused him suffering pay for their misdeeds.

Often, Asin would tell the lad tales of his former student and the tremendous power he had. The boy was impressed and wanted to become stronger. With those thoughts, he trained harder than ever, determined to become the strongest.

However, this could not last. Another battle ensued, with monsters suddenly appearing and attacking them. Asin managed to fend them off to protect his new student but he was again seriously injured. This time, the injuries proved to be fatal and he died two weeks later. The boy desperately tried to save his master but when he realized that nothing could be done, he went a little crazy and declared, "Master, I'll put your name as reciprocation for all this and I swear I'll be stronger than anyone including Jin." Finally, he decided to wear his teacher's first name, Asin.

Wandering without purpose, Asin eventually stumbled upon the Grand Chase and sees Jin whom he recalls from the tales told to him by the deceased Asin Tairin.

On the surface, Asin maintains a kind, helpful, and gentle attitude. But while he looks relaxed and carefree, he is dangerously cautious, never acting once he has understandable, rational logic. Asin hides his true nature underneath a poker face, and his cleverness and cunning allow him to disguise the sarcasm in his words. In truth, Asin is cynical, sadistic, and acid, a person who thinks only about his ambition: to become the most powerful martial artist of all time to get revenge on those who mistreated him in the past.

This is where his nickname, "The Blue Fox of Kanavan" is derived from; like a fox, he maintains a gentle attitude that masks his cunning and devious ways.

Asin can be unlocked by purchasing a Mission scroll from the shop and completing its objectives. 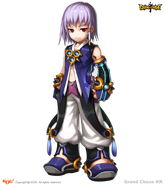 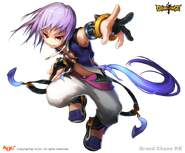 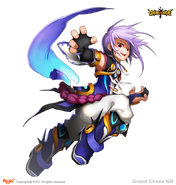 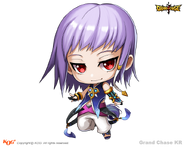 The last days with Asin Tairin.

Promotional artwork of Disciple in the Twelve Disciples update. 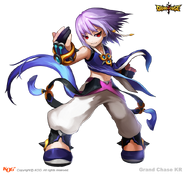 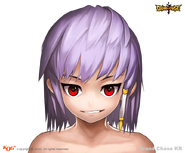 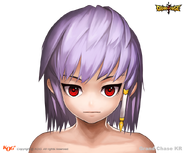 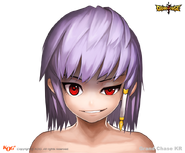 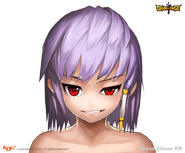 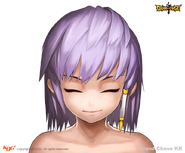 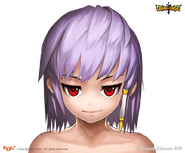 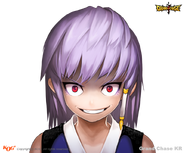 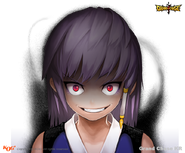