Shaken by the destruction of her village and filled with doubts, Rin ended up allowing the evil sealed within her to awaken in her heart. This also forced the spirit of the goddess Agnesia to wake up and strengthen her powers. Now Rin has to face a difficult decision whether to choose between light and follow the teachings of the priests of Agnesia or give in to the darkness and vent the vengeful feelings within her.

The Awakened is a job unlike any other in Grand Chase as it has two separate classes. Upon completing Job Change, a choice must be made between the path of Dawn or the path of Twilight. Each has its Skill Tree and once the choice is made, Rin will lose access to the skills in the path she did not pick. However, by removing all skills on the Skill Tree chosen, Rin can switch sides and obtain the skills on the other one thus losing her former skills.

By choosing the path of Dawn, Rin will follow the natural evolution of the Phoenix, gaining more support and defense skills as well as the ability to increase the jumping power of allies or create protective shields for them. The Glyph System is improved and Rin gains new attacks that can be used in conjunction with them, including the ability to use the final glyph without spending it for a brief period. Furthermore, Rin also gains the ability to double jump.

By choosing the path of Twilight, Rin loses her ability to use the sacred seals. Her new skills become more aggressive and focused on dealing damage to enemies, completely replacing her attacking style with a new combo attack. The powers of darkness are more focused on Specials instead of glyphs and Rin will gain a bar of evil energy that when filled will allow her to recover HP temporarily when she attacks. 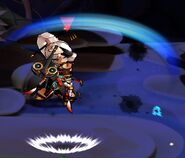 Retrieved from "https://grandchase.fandom.com/wiki/Awakened?oldid=76170"
Community content is available under CC-BY-SA unless otherwise noted.