Demons cheered. Their screams shook the stage. He couldn't believe that all the screams were for him. However, the vibration on the stage and the sense of realism were all telling BF that it's real.

Just a few months ago, BF was an amateur rapper. A rapper who couldn't say a word in front of other people. To gain more confidence, he entered a hip-hop audition held in the Dirty South and that was his only public activity. At that time, BF had an interview saying that he's just an amateur rapper who put a big meaning on participation.

However, the producer introduced him as a professional rapper from Hellifornia. The listeners paid attention to BF's performance, but it wasn't like he got better right away. In fact, he couldn't perform well because he was too nervous. He missed the beat and got the lyrics wrong. He became a laughing stock as soon as his talent was exposed to the whole world.

『This is the talent of a rapper from the birthplace of hip-hop? Is this a joke?』

Listeners and people on the internet mocked and criticized him. People's evil words suppressed BF. BF, who went from a no-name rapper to a notorious rapper couldn't stand all the criticism.

One rainy day, an emotionally wrecked BF went to a river. He wasn't trying to jump off, he just wanted a picture of himself to post on his social media saying that he's psychologically drained and wanted people to stop criticizing him. But as he was trying to find the right angle for his selfie, the wind snatched him up and BF was in the air.

BF was swept away by the wind and he landed in the Demon World. Maybe because so many people told him to go to hell...

The demons thought of BF as an artist who committed suicide because he couldn't handle his artistic value and handed a microphone to him. BF didn't want to hold a microphone, but he didn't have the nerve to deny in front of many scary looking demons with horns on their foreheads.

"What is this beat!? This rhythm! Music from heaven!"

He can't remember how many times he forgot his lyrics. He was offbeat also, it was a huge mess. And he knew he had nothing to say if they hissed at him. But, oh my? The demons loved BF's rap! BF was wondering if they were making fun of him at first.

But the demons were very honest. Demons who listened to BF's rap named his performance the Messiah's Arrival. His fandom grew and it only took him less than three months to conquer the demons' hip-hop scene.

Three months was enough time for a person to change.

"YEAH! This is the end of the performance! Hit it!"

BF ended his performance with a lot of confidence. He got used to staff working for him, so he felt a little weird when someone was sitting in his seat as he came back to his waiting room.

"Who are YOU? This is MY waiting room?"

The red-haired boy who was sitting in his seat scanned BF from head to toe. Then he smirked.

"I will make you an offer that you can't deny. You! Become my teammate!"

BF can be fought as a boss in Act 18.6: Artist's Performance at Army and uses his designated skills as a unit. 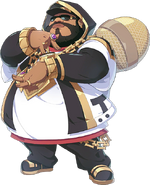 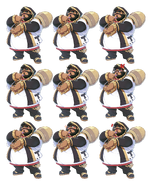 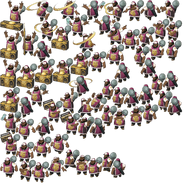 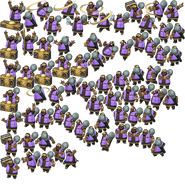 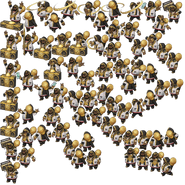 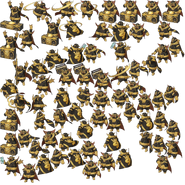 Retrieved from "https://grandchase.fandom.com/wiki/BF?oldid=76087"
Community content is available under CC-BY-SA unless otherwise noted.