Kōhei Amasaki
Baldinar Re Meudias was originally the Prime Minister of Kounat responsible for the kingdom's destruction. He would be known as Ashtaroth in the original game.

In Grand Chase Dimensional Chaser, Baldinar was encountered in person and was fought as a boss later on.

Thousands of years before the main events of the game, Baldinar found the Klara Libri, a book containing the secrets of the world. He followed its instructions and created the Soul Stone, however, it was too late when he realized that it could only be controlled by the Kounat Royal Family, who could withstand the "Geas" imposed upon them by the gods. The Aernas Hammer, powered by the Soul Stone, went haywire and destroyed the entire kingdom, leaving Mari as the only living Celestial. The destruction inadvertently created the war between elves and dwarves on the Archimedia continent, as the two sides had blamed each other for the incident ever since.

Even after several hundreds of years, Baldinar had survived as an astral form due to the effects of the Soul Stone. Soon, he snuck deep in Xenia when he realized that the Deity Orbs held by the six gods were pieces of the stone he had created. Due to the demonic essence that had been spread by him, numerous creatures evolved into monsters and the gods started to lose their sanity. Taking advantage, Baldinar approached Ashtaroth, the guardian in the Fortress of Ascension, and stole his being.

In a flashback, it showed how Baldinar got his hands on the Klara Libri from Kassias Grandiel and offered to help him with his research not knowing what the book truly contains.

Baldinar can be fought as a boss in Epilogue 3.7: New World as the False Creator.

Baldinar creates copies of Kounat Soldiers that were encountered in the game prior. If these are not cleared within the given time limit, he will gain an increase in damage dealt, and a decrease in received damage for the rest of the battle as well as having his skill cooldown reduced. Then he recovers a huge amount of HP/MP.

After 8 seconds, Baldinar focuses his mind to enhance his creations. This can be interrupted by the player with a stun or any flinching skills. 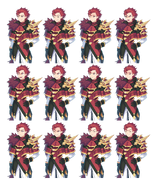 The expression system of Baldinar.

Baldinar during a flashback in Kounat's Collapse.
Add a photo to this gallery

Retrieved from "https://grandchase.fandom.com/wiki/Baldinar?oldid=81660"
Community content is available under CC-BY-SA unless otherwise noted.