"God's avatar and controller of flames."

The God who created Kricktria had returned to find the world enveloped by ancient malignant spirits. He expunged the spirits from the world and then created avatars of himself to help stabilize the dimension.

Of all the avatars, Balzac has the most aggressive and destructive personality. Though he is currently dormant, based on the legend that has been passed down, after putting many people in crisis, an unknown hero had him sealed deep within the mines.

Corrupted Balzac can be fought as the second boss in Epilogue 1.7: Fire and Ice.

Dark Balzac takes the appearance of 'Corrupted Balzac' in his Chasm and has his received magic damage and skill damage decreased by 40% then his physical damage given is increased by 80%. 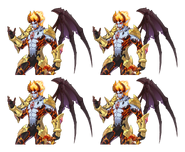 The expression system of Balzac.

Corrupted Balzac's icon.
Add a photo to this gallery

Retrieved from "https://grandchase.fandom.com/wiki/Balzac?oldid=82408"
Community content is available under CC-BY-SA unless otherwise noted.