Jeong Yeong-wung
Berkas is a giant dragon that is fought as a boss in the Raid Dungeon, Berkas' Lair.

Berkas hails from the Iron Dragon species that is native to the Underworld. Possessing a strong sense of pride, he always wanted to be independent of his species and create his own rule. However, the power structure of the Iron Dragon species has been firmly established for thousands of years, which consisted of the younger dragons being subordinates to the ancient and more powerful dragons, and Berkas soon concluded that it was impossible to gain power in the Underworld. Thus, he decided to rule over Aernas where the flow of mana is unstable and inferior mortals reign. After much preparation, Berkas succeeded in opening a Dimensional Portal to the human world. Leading his army to Aernas, he began constructing his own nest in the deserts of Alcubra.

At some point, Rufus had engaged Berkas in battle alone that ended in the Bounty Hunter's defeat. It was during this fight that Rufus lost his left arm.

Berkas' passage was detected by the Holy Knights who were immediately dispatched. Upon locating his lair, the knights quickly constructed Magical Devices that would aid them in the battle against this massive creature. Unfortunately, after a tremendous battle, the knights were forced to retreat before they were completely exterminated by the dragon. The Grand Chase who was traversing Alcubra's deserts at the time detected a mana collision and decided to investigate.

Upon their entry into his lair, Berkas detected the opposing forces and, after realizing that Rufus was with the Grand Chase, subsequently mocked him, saying that his prosthetic left arm "remembers" the dragon and asked if he wanted to lose his right arm as well. Berkas then declared Aernas all of his before the forces clashed.

After an incredibly heated battle, with both sides extremely fatigued, Berkas was surprised at how mortals can match his power and was thus forced to retreat, but assured that next time his enemies would kneel before him. Rufus swore he would cross off Berkas' name on his bounty list in the next encounter.

TIP: Excluding Tail Sweep, every attack of Berkas has a warning label and deals with high damage.

Berkas stomps the ground with one foot, generating an earthquake that throws in the air the players unless they were in the air or jumping. This is the only attack that does not damage the Magical Devices.

Berkas roars and summons bursts of fire pillars randomly all over the battlefield. The Catapult Device can interrupt this attack.

Berkas unfurls his wings to generate a Wind Storm around him, knocking players far away. This attack can hit the players 2 times if they are close enough to Berkas.

Berkas stomps the ground with both his feet to knock up players beneath him before breathing flame forward. This attack will generally instantly kill the players unless they counter.

Berkas will use this attack after losing approximately 10% of his HP in one assault under the effect of a Suppressor. Berkas will fly to the left, starting from the lower-right corner, then from the upper-left corner he flies to the right, and lastly, he will breathe fire while flying from the upper-right corner to the left. The breath leaves flames all over the map, dealing heavy damage that can kill players. To avoid the attack, the player must activate the Barrier Device. Berkas will keep repeating this attack until he is shot down by the Catapult Device.

Berkas swings his tail to hit and knock away any player behind him. This is the only attack that does not have a warning label.

There are two sets of tactics used among the players in the game to defeat Berkas.

Some players are assigned to protect the Devices from the monsters, others are focused on dealing damage to Berkas. When the Suppressor is ready, all the players will focus their attacks on the boss. While Berkas is flying for his Aerial Breath, the player who protects the Catapult Device shall activate it, knocking him down, making it the perfect time to activate the Suppressor and call an all-out attack. Some players may be assigned to deal with the Hatchlings as well. If someone messes up or something goes wrong, the player at the Barrier can activate it to mend the mistakes and gain more time to reorganize.

One player is assigned to the Barrier, while all the others are assigned to the Suppressor. At the beginning of the battle, the players clear the mobs, wait, activate the Suppressor, and commence a full-scale attack on Berkas. The damage dealt must be enough to make him fly. After he starts flying and breathing, the player assigned to the Barrier shall activate it to protect teammates, and when Berkas is close to the left edge of the map, the players activate the Suppressor early, as Berkas will be exactly over the Suppressor but only for a moment before he flies forward. That is the time for all the players at the Suppressor to unleash every special skill and pet attack on Berkas while he is flying by. As long as Berkas is not shot down by the Catapult, he will keep flying, regardless of the damage he takes. A typical character used for this tactic is Mari, because of the Geas/Polaris Dual Wielding System combination, which is extremely useful as Geas' Freeze Tempest deals insane damage to Berkas, due to his huge hitbox, and Polaris' Sector Lv.3 Portal between Barrier and Suppressor shortens the distance and create a safe shortcut to travel between the two Devices. 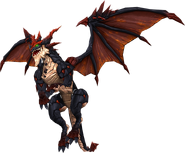 Retrieved from "https://grandchase.fandom.com/wiki/Berkas?oldid=81979"
Community content is available under CC-BY-SA unless otherwise noted.