Berkas' Lair is a Raid Dungeon. This special dungeon actively involves and encourages co-operative gameplay with up to 6 party members against an extremely powerful boss.

Like the Hero Dungeons, there are Time Zones on when the Raid Dungeon opens and closes. Players can run the Raid Dungeon as many times as they wish (as long as they fail), but can only complete it once. The clock resets at 12:00 AM PST.

Due to the difficulty of the dungeon, a character of level 85 or above and SS grade stats is required to enter.

The Holy Knights who detected an impure energy from the Underworld came to know the existence of Berkas after a search, and initiated a fierce war in the dragon's nest. The Grand Chase, who were traveling the deserts of Alcubra, detected a collision between huge energies in the desert. Realizing that something was wrong, they decided to investigate. 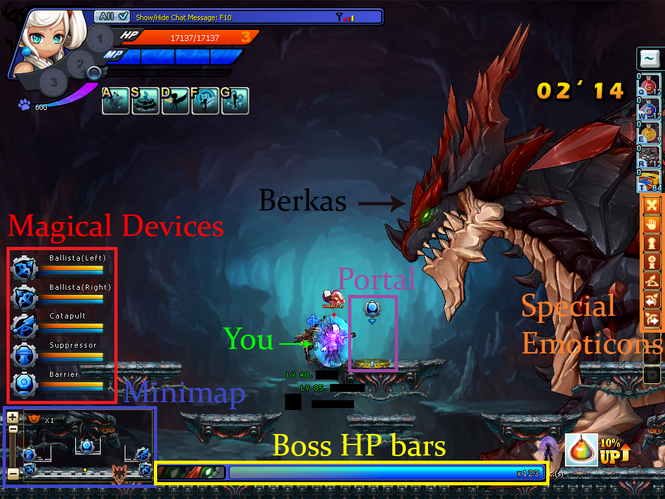 Red: The status of the Magical Devices. The orange bar is the HP bar, and the blue bar is the Utility bar. If the Device icon turns red, it means that the Device is under attack or is destroyed, thus it cannot be used.
Blue: Minimap: shows the location of Berkas (The dragon symbol), Monsters (red dots), Devices (Devices icons), the party (green dots) and your position (yellow dot). There is also a bar that enables to change the zoom level.
Yellow: Berkas's HP bars.
Orange: Special Emoticons used to coordinate the party members in the battle against Berkas.
Purple: Portals: Each portal with an Device icon leads to where the specified Device is. In addition, there are other two portals, one on the right side and the other on the left side of the map, which are connected to each other.

There are magical equipment present in the map to help aid the players in fighting the boss and are crucial to attain victory. Each weapon has its own HP bar and utility bar, the latter which indicates when the weapon can be used. Should the device's HP bar drop to zero, it cannot be used and takes 5 to 10 seconds to regenerate.

The equipments are as follows:

An offensive weapon that is used to deal massive damage and tie down the dragon, preventing it from moving. There are two ballista, one on each side of the map. Beware that both ballista share the same cooldown.

A defensive weapon that is used to create a magical shield that protects players from the dragon's attacks. It grants invincibility and restores the HP of those around it.

An offensive weapon that is used to attack and shoot down the dragon after it takes into the air, stunning it.

A magical, support-based weapon that weakens the defense of all monsters upon invocation. It must be activated in order to lower Berkas's defense to levels where it can actually be damaged.

Suppressor
Add a photo to this gallery

These emoticons are used to coordinate the party members in the battle against Berkas. When they are used, an order appears on the general chat. Those emoticons will override the first seven emoticons in the emoticon table.

Elesis: It should be somewhere around.. Here?

Dio: The evidence of magic collision makes it certain.

Rufus: (Argh... The pain on my left arm is getting worse.. What is going on?)

Rufus: Don't mind it much. It's nothing important.
Guild Manager: Wait, who is this! You are the Captain Elesis!

Elesis: Bestair! How could you be here!
Guild Manager: Serdin kingdom has also stuck their nose into it after detecting the magic collision.

Elesis: I see. By the way, what is this enormous machine? I've never seen them before.
Guild Manager: These are magical weapons to slay huge monsters. Seems like hunters used to use these.
Guild Manager: Such weapons to be sitting around. This must means... I can only guess, everyone be cautious!

Guild Manager: Shh! Everyone take cover and pay attention to ahead of yourselves!!

Ley: This is.. A dragon! Must be as powerful as Grim Hand or stronger!

Arme: A lot of people are knocked unconcious. They look like.. Hunters to me!? So many of them...how...

Elesis: This means that the guy is very tough to be brought down...
Guild Manager: It seems like these magical weapons, which are already placed here and there, were for slaying that Dragon.
Guild Manager: Even for me, it is first time seeing a Dragon. So unfortunately, I do not have much information on it. However, those magical weapons will definetely come handy on battle, so protect it at all cost.
Berkas: ?!

Sieghart: Uh oh... Its looking at this way! I think it noticed us!
Berkas: Grrr~ Who's there!!

Elesis: What?! Rufus! Do you know him?
Berkas: Ahh~ Look who's here! Did you crawl up here from the end of Underworld, the son of Legis.

Rufus: Argh!! My arm!!
Berkas: Kehehe.. It seems like your left arm still remembers me. Do you want to lose your remaining right arm as well? Kahahahahahaha!!!

Lire: Watch your steps!!!
Berkas: Kahahahahah!! From now on I will rule Aernas!! From now on!! I am the King!!

Elesis: Everyone prepare for battle!!!

Arme: I don't want that kind of opponent ever again... Phew!

Ley: And your legs are shaking. Stop pretending, dumb head.
Berkas: Grrr~ To have such guy to exist in Aernas...
Berkas: But do not think this is the end!! I am backing off this time but next time... You will kneel before me!!! Kyahahahaha!!

Rufus: ...Next time, I will remove you from my death note... (means you will die)

Guild Master Bestair, who is in charge of the raid
Add a photo to this gallery
Retrieved from "https://grandchase.fandom.com/wiki/Berkas%27_Lair?oldid=54716"
Community content is available under CC-BY-SA unless otherwise noted.