Who are you? Who is this cheeky prisoner who speaks loudly despite seeing the chief?

Are you new here? Do you want to go into solitary confinement? What? You're an acquaintance of mine? Don't lie. I have no memories of ever meeting a prisoner like you!

So you want to know why I left the Dimensional Trading Exchange iron box and ended up being a jailer at a place like this? It's a funny story!

Did you think that the Dimensional Trade Exchange was a good place to work? The salary is ridiculous for the work. Overtime is a given and you always have to travel for business trips!

With the exception that the job is stable, there are no other merits. Yup. That's what I'm saying. Of course, every job has its pros and cons. But, the most difficult part was the people!

The one that made things difficult enough for me to leave was Kiwi! Hm? Do you know Kiwi? You were able to smuggle because Kiwi was so lax? See, that's what I mean! Kiwi is just that type of cat!

He sucks at his job! Lacks awareness! And since he was never able to finish, I had to pick up the slack!

Let me tell you a story. There was a time when that idiot Kiwi handed over work to me without properly checking it first. So of course, I didn't even know there were smuggled items mixed in and the items were distributed as is. Could you even imagine how much trouble I got into because of it?

Even when I think back to that time, I can feel my blood boiling! Compared to that, this is heaven. As chief for this Alpawtraz, it's the same as being king!

Wait... Now that I think about it, you look familiar...

Aren't you the smuggler from that time?

Guard! Guard! Take this guy to solitary confinement! I want to show him hell!

Berri can be fought as a boss in Epilogue 3.1: Alpawtraz Prison and uses his designated skills as a unit. 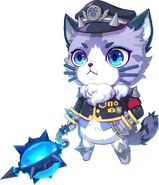 Prison Warden icon.
Add a photo to this gallery

Retrieved from "https://grandchase.fandom.com/wiki/Berri?oldid=81521"
Community content is available under CC-BY-SA unless otherwise noted.