"The controller of Mouspia's dark world."

He is the boss of the gang organization that now secured all of Mouspia. Originally, the dark world of Mouspia was home to various gangs that were always at war with each other, however, once Big Al appeared, all of that changed.

Up until now, those of the same species would group to go to war with another species, however with Big Al, he accepted gangsters from every species as long as they surrendered or came peacefully. This wide tolerance is what had brought various forces under the banner of Big Al and the outstanding talents of these species were appointed to positions fitting of their skills regardless of their species. Eventually, all the forces crumbled and Mouspia's dark world became successfully unified.

Big Al, who unified the dark world, had nothing to fear. Well, that was before he met the martial artist and demon who appeared from the dimensional gap.

Big Al utilizes the same attacks he has as a playable character. 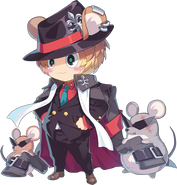 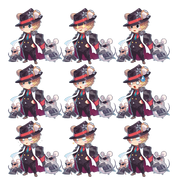 The expression system of Big Al.

Retrieved from "https://grandchase.fandom.com/wiki/Big_Al?oldid=77177"
Community content is available under CC-BY-SA unless otherwise noted.