Since a long time ago, the race of imps that lived in the desert, lived their lives valuing hard work and diligence. From his childhood, Big Imp also lived his life holding to those values and dreamt of one day being the best Laborer ever. The day the demons invaded became the day his life and his dreams were destroyed.

"We must drive out the demons."

"Instead of fighting with shovels and pickaxes, let us fight with swords and spears."

Despite the cries of the other imps to raise arms and fight the demon invasion, Big Imp stayed back. Though he was much bigger and stronger than the other imps, all he had learned was how to build buildings or dig the ground. When the imps, who were fighting for their lives, fell to the ground, he closed his eyes and tucked his head.

He thought as the Imp Empire fell at the hands of the demons. It's not like it was something they could have stopped anyway. It wasn't like anything was changing now that the demons were here. As long as you did what you were told, it would be just like it was before. Going out and getting yourself killed, that's something only stupid people did. He worked harder than anyone else since that was how he could prove his worth...

"Are you the one called Big Imp? Since you've worked so hard, I'll give you a gift."

One day a beautiful demon appeared at the location he worked and began to whip him as she said that. What's going on? I worked so hard... So why is she hitting me?

Despite the pain that spread throughout his body, within that pain he began to feel something strange. It hurts. I'm pretty sure it hurts, but... What is this feeling? The feeling that slowly begun to take over his body was a pleasure. His eyes had been opened to a new world.

"Starting today, you'll be my slave."

Charlotte's words made his mouth water as if he had bit into a sour lemon. Yes. I am a slave. I have always been a slave!

Big Imp can be fought as a mini-boss in Act 5.3: Imp Labor Camps then he reappears with Charlotte in the boss fight.

Big Imp utilizes the same attacks he has as a playable character. 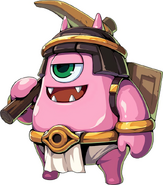 The expression system of Big Imp.

Retrieved from "https://grandchase.fandom.com/wiki/Big_Imp?oldid=77340"
Community content is available under CC-BY-SA unless otherwise noted.