The Blood Dancer is a weapon utilized by Uno for his Bloodless job in Grand Chase. He wields this katana to do basic melee attacks.

The Blood Dancer is an old blade that once belonged to Reina. It would be used by Uno to take the lives of the people in the very village he had stayed and rested including the girl that gave him the sword in the first place. 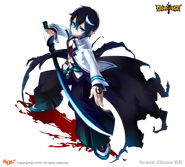 Retrieved from "https://grandchase.fandom.com/wiki/Blood_Dancer?oldid=76760"
Community content is available under CC-BY-SA unless otherwise noted.