Bounty Hunters are warriors of the Underworld, held responsible for chasing down the evil souls that might escape from its prisons and flee back to Aernas. They have special abilities that allow them to either send the refugee back to the Underworld or exorcise them completely.

Among the most famous of Bounty Hunters was the father of Rufus and Lass, Legis Wilde. However, while he is considered a hero in the Underworld, Legis is hated by Rufus who never forgave him for leaving. He started to hate him, even more, when he discovered that his father had another child, a hybrid, with a mortal.

Rufus came to Aernas only to find him trapped as a freak in a circus. Disgusted by the weak and pathetic creature who was his half-brother, he abandoned him.

To clear any memory about his father, Rufus decided to become an even more famous and popular Bounty Hunter than him, taking the position that was once his father's. Armed with his pistols, the Eyeteeth, Rufus began accepting the most dangerous contracts, chasing the most powerful spirits he could find. This obsession eventually leads him back to the world of Aernas when the evil spirit of the Ringmaster and his Nightmare Circus escaped from the Underworld.

While chasing the creatures of the circus, Rufus finally realized the other spirits had been killed by the power of the "blue flame", a mystical energy that was a characteristic of his father. Determined to find that source of power, it came as a surprise to Rufus that it was not his father responsible but his half-brother, now much more powerful than when he last saw him.

The Bounty Hunter wields dual handguns and has a high amount of speed. Rufus is known for his exceptional mid-range and close-range attacks, allowing easy playing for first-timers with intuitive control and various connected skills.

As a first job, Bounty Hunter does not need to be unlocked; Rufus starts as this job. 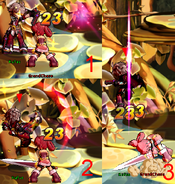 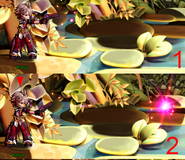 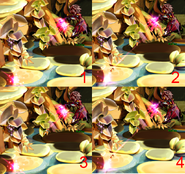 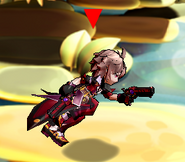 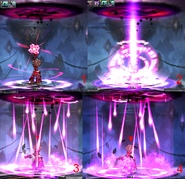 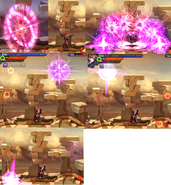 Final Shot
Add a photo to this gallery 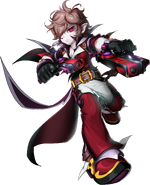 Retrieved from "https://grandchase.fandom.com/wiki/Bounty_Hunter?oldid=76497"
Community content is available under CC-BY-SA unless otherwise noted.