"The seeker of his own Salvation."

The priest who heard the voice over the wall was not flustered. The reason for that was because there were many religious people including other priests, who are unable to find the answers on their own and would come in for confessions.

From the priest's point of view, these types of situations were a bit easier to handle because there was no need to explain or speak of religious teachings and usually they would ask questions and answer it themselves. The only thing he needed to do was speak in moderation and nod his head once in a while.

"Please tell me. I am ready to listen to you."

As soon as the priest spoke, the man over the wall began to tell his story.

"Even though I am called a priest, all I have is just a small abbey with a few sisters taking care of a few children. Because we do not have much, I was worried that we wouldn't have enough to eat during the winter, but I live for each day watching the children grow up. Until that day came."

The priest stopped speaking for a moment and cleared his throat. The priest strangely felt that this man's voice very much resembled his own.

"That day was an especially cold day. In the dark of night, during the snowstorm, a group of people came to our abbey. They introduced themselves as lost travelers and asked if they could stay for a while until the snow subsided and we accepted. There was nothing strange about it. Since our abbey is so deep in the mountains, it is not very often that we have people coming to us for help. However, the next morning while I went to gather firewood, something terrible had happened."

The priest frowned for a moment. Listening to this story was becoming difficult. It wasn't simply because the ending of the story was obvious.

The priest yelled as he was no longer able to hold back. The man behind the wall snorted.

"Weren't you able to help at the time?"

The priest felt as though the man's voice had clutched his heart. That's right. That day, after he had returned from gathering firewood...

"Weren't the children and sisters still alive when you had returned? However, all you did was watch and pray. All you did was justifying the fact that you wouldn't have won, if you had fought against them and just prayed expecting someone to miraculously appear and save them, right?"

The priest quickly opened the door to see who the man was. However, there was no one there. Of course, there wouldn't be because from the beginning it was he himself...

He whispered as he closed his eyes. Even if he had attempted to do something, the results would have still been the same. The only difference would have been that he would also be dead along with them. His choice was not wrong. However, in exchange for his choice, he will forever suffer while justifying his actions and still feeling guilty.

If there ever was a chance to turn back time then at that time he would make a different choice.

Briel can be fought as a boss in Act 10.9: Corrupted Priests. He reappears in Epilogue 2.4: Collapsing Bridge.

Briel utilizes the same attacks he has as a playable character.

The expression system of Briel. 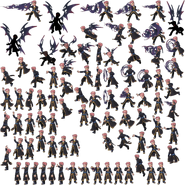 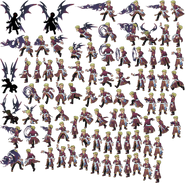 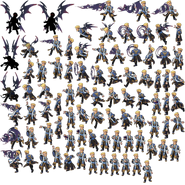 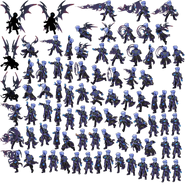 Retrieved from "https://grandchase.fandom.com/wiki/Briel?oldid=81498"
Community content is available under CC-BY-SA unless otherwise noted.