"The master of the powerful shield."

The boar tribe is famously known for being the toughest and most reckless tribe in the Demon World, always standing in the front lines of battle. In particular, their faith in their shield is similar to that of how first-rate swordsmen are with their swords and do not neglect to repair it.

Captain Boar is famous within the boar family for being the best at wielding a shield. With a shield bigger and stronger than anyone else, he was able to be victorious in numerous battles.

If you see him on the battlefield, it would be best to run away. If you are able to escape, he will not be able to chase after you quickly because of his heavy shield. However, if you decide to attack him, you may find yourself hopeless in front of his impenetrable shield.

Captain Boar can be fought as a boss in Raid 1.1: Snow-Covered City and uses his designated skills as a unit. 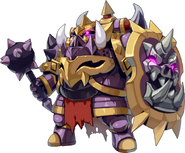 Retrieved from "https://grandchase.fandom.com/wiki/Captain_Boar?oldid=81481"
Community content is available under CC-BY-SA unless otherwise noted.