For the S-Rank version of this character, see Carnero (World 5).

I had been lying on the grass and gazing at the sky when my eyes turned to the shadow that was now hanging over me. The owner of the shadow was my childhood friend now turned chieftain, Viola.

I quickly turned my head as if I had seen something I shouldn't have and got up. I wouldn't have been able to stay here anymore because of Viola's incessant nagging anyway.

"You've been really weird recently. I heard you been skipping class and leaving the mine to do bad things... Hey! I'm not done talking!"

At Viola's words, I was hesitant for a moment but decided to just leave. I already knew. However, what could I do... For a model student who was already a matriarch and leading the whole tribe, would see someone like me as a bad student. Wait don't get me wrong! It's not because of Viola. Um... yeah, it's not.

I said as I stretched out my body. Today seems like a day for something interesting to happen.

Carnero can be fought as a mini-boss in Act 1.6: Herb Fairy, We Meet Again and uses his designated skills as a unit. He reappears with Duchi as mini-bosses in Act 2.6: Ramblin Sibling's Reunion. 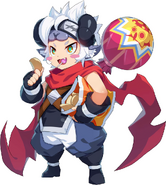 Strongest icon.
Add a photo to this gallery

Retrieved from "https://grandchase.fandom.com/wiki/Carnero?oldid=81632"
Community content is available under CC-BY-SA unless otherwise noted.