Act 7.6: Protector of the Door

Act 7.6: Protector of the Door

Charon was originally a guard that protected the execution grounds. Charon had spent his days watching as the sinners struggled in desperation and fear of death. What had started off as feelings of fear and sympathy for the sinners, soon turned into bliss and pleasure.

The sound of the scythe cutting through the flesh and the expression of the prisoner withering in pain. He was not able to forget any of it. From that day forward, he handled the executions himself. There were times when he would free the prisoners, only to capture them again and other times he would give them a weapon and have them fight for their lives. Over time, they had nicknamed him the grim reaper.

"Are you the grim reaper?"

One day a demon by the name of Belile, introduced himself and told Charon that he would teach him how to kill more people. That is how Charon joined Belile's army.

Charon can be fought as a mini-boss in Act 7.6: Protector of the Door and uses his designated skills as a unit. 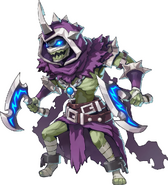 Ambassador icon.
Add a photo to this gallery 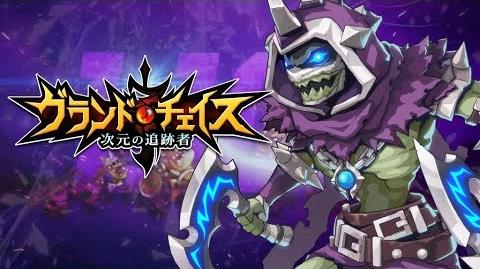 Retrieved from "https://grandchase.fandom.com/wiki/Charon?oldid=81464"
Community content is available under CC-BY-SA unless otherwise noted.