The Chaser System is an added component of the Hero Growth feature that allows players to furthermore strengthen their fully Transcended Heroes and each getting access to a unique 'Chaser' skill giving them more power that is guaranteed to help wipe out enemies.

To unlock the system, materials such as Chaser Crystal or Chaser Open Ticket are required plus Evostones according to the Hero's class and Prana. Afterward, the Hero's 'Chaser' rank will be activated and new Traits can be learned or mastered for each milestone. 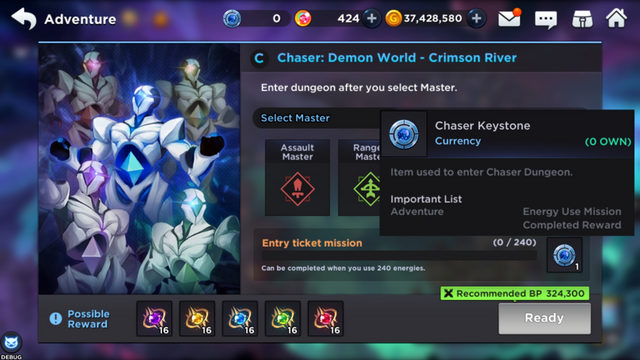 Chaser Crystals can be hunted from these special Dungeons which are available from World 4: Demon World - Crimson River and onward. They can only be entered using Chaser Keystones which can be acquired by expending 240 Energies. The player can also use Radiant Shinies and Gold to craft the Chaser Crystal of choice.

There are 5 'Masters' to choose from before entry and by defeating them, the player shall receive Chaser Crystals according to the chosen Master's class.

When the player unlocks the Chaser System, new effects and abilities of a Hero can be used. Players must raise their Hero's 'Chaser' rank to gain Chaser Traits. Chaser Crystals will be used to apply new Traits to Heroes by unlocking nodes in the Chaser System user interface including the Hero's unique 'Chaser' skill.

TIP: A 'Reset' button is available which will revert all upgrades and regain the Chaser Trait Points that are otherwise used.

The Chaser Skill can be used in all contents. PvE and PvP usage will be balanced according to the content. Heroes with the Chaser System active can fill up a gauge shown under their HP as they fight. When the gauge fills up, the Chaser Skill's icon will appear above the Hero's skill slots. Tap the said icon to activate the Chaser Skill.

Click on the icons or names to view the skills.

March of the Empress
(Chaser Skill of Ley)

TIP: A button added to the 'Auto' section on the top right of the screen in-combat allows the player to automatically use the Chaser Skill.

Retrieved from "https://grandchase.fandom.com/wiki/Chaser_System?oldid=83220"
Community content is available under CC-BY-SA unless otherwise noted.