After being discovered unconscious within the ruins by the Grand Chase, Rin tells them the story of how her village was destroyed and how she is currently being hunted down. Dio who had been investigating the area discovers that the dark energy pursuing Rin originates from a powerful, high-ranking demon. To understand the reason behind the demon's actions as well as to protect Rin, they invited Rin into the Chase and proceed on their journey.

On the other hand, the darkness that had controlled Rin before fades with her awakening. As the forces of light and dark within her begin to fight each other with neither letting up, Rin begins to investigate these two forces that lie within her soul.

It is necessary to be Lv.60 to be able to participate in 4th Job Promotion. 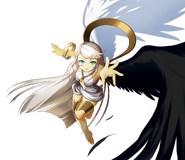 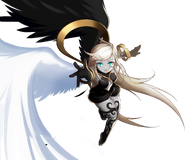 Retrieved from "https://grandchase.fandom.com/wiki/Chosen?oldid=76104"
Community content is available under CC-BY-SA unless otherwise noted.