The Imp Empire in the desert had a beautiful Queen. Even though she was not amazingly clever or had a powerful military force backing her, she was benevolent and merciful and lived every day peacefully with her people. One day, the Queen disappeared. Without leaving any traces...

Along with this bizarre incident, the peaceful Imp Empire was soon invaded by the demons. They quickly collapsed without a chance to show their might and fell into slavery. 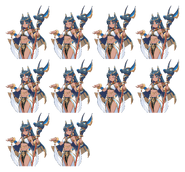 The expression system of Cleo. 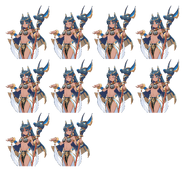 Omnipotent Queen icon.
Add a photo to this gallery

Retrieved from "https://grandchase.fandom.com/wiki/Cleo?oldid=82402"
Community content is available under CC-BY-SA unless otherwise noted.