There is nothing else known about Daniel other than being already a servant of Heitaros Cratsus 2,000 years ago when he first came to Crimson River.

Daniel welcomed Ley to the mansion and he was introduced to the Grand Chase. As she noticed a lot of new faces, the butler reasoned that the longer they worked, the more likely they would quit, and when the lady sought her father and Jeeves, he claimed that they just left due to something very urgent. Calling back the attention to Ley, Daniel proceeded to prepare a grand feast for all the guests.

Going further into the mansion, the Grand Chase came across Daniel and Ley realized he was the mastermind behind the betrayal of their servants. The butler was glad that he could finally help Heitaros and declared she would only find out where Peter and Jeeves were when they defeat him.

As Ley interrogated Daniel about the whereabouts of her father and Jeeves, he claimed that it was too late as they had already been dealt with by Pino and was sure they were locked up in the Purgatory. Then the butler said the lady should worry about herself first since the explosion would alert all the troops to advance towards the mansion.

Daniel can be fought as a boss in Act 15.3: Betrayer's Identity. 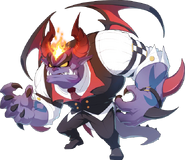 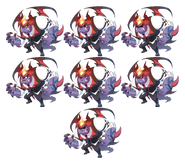 The expression system of Daniel.