Dark Anmon was a demon that is fought as a boss in Battle for Bermesiah.

According to Ryan, Dark Anmon was once a Nephilim warrior, who gave in to corruption and thus, became an evil, powerful demon. Many creatures of Bermesiah were controlled by him, and in return, are given greater strength.

Ever since the defeat of the Black Knights, the Black Fairy Queen had served Dark Anmon. Also, he had given the Orc Lord a rebirth and greater, violent strength if he were to serve him.

The fallen Nephilim impeded the Grand Chase who was heading to Xenia but ultimately underestimated them. Before he died, Dark Anmon informed the group that the new evil would bring them fear and desperation. Ryan also pitied him, but Dark Anmon told him that it was useless.

Several Dark Anmon's attacks are reminiscences of Ryan's Nephilim transformation. He can perform a forward punching combo as his primary melee attack. Dark Anmon also has an attack where he will lunge himself forward, damaging players in his path. He may jump to throw down a dark orb and can disperse a large shockwave resembling Sentinel's Soul Impact.

Dark Anmon has two Armored Cats aiding him and will replace them if any are killed. When summoned in Ellia's Boss Gate, Dark Anmon gains one additional attack where he can summon a dark tornado that will damage anyone who comes in contact with it. Furthermore, he reacts faster and is more likely to use his lunging attack and Soul Impact. 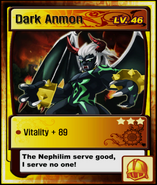 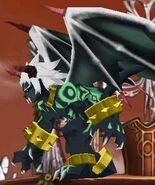 Retrieved from "https://grandchase.fandom.com/wiki/Dark_Anmon?oldid=79976"
Community content is available under CC-BY-SA unless otherwise noted.