It is said that the Dark Hierophant is also capable of "rifting through the dimensions of time and space".

Dark Hierophants can cast dark purple orbs that fly straight across the screen at a fast speed which leaves a damage and a curse effect. They can also cast another orb, which is reddish and follows the nearest player, and if a player gets hit with it, the orb causes damage and depletes the player's MP completely. The red orb can be banished by one attack, however. Dark Hierophants can also cast a skill similar to Battle Mage's Deep Impact, which is indicated by when it claps its hands. For a close range attack, Hierophants cast red and purple flames from the ground that damages a player multiple times, which can deplete a player's MP completely, though without cursing the player.

It seems that the purple energy the Dark Hierophant emits causes cursing effects while the red energy absorbs Mana and converts it to health on its user.

Dark Hierophants are also capable of teleportation. This can be quite troublesome as Hierophants can teleport right near a player, unexpectedly attack (and/or drain all their MP), and teleport away. 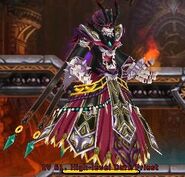 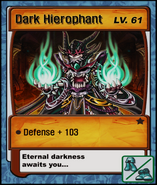 Retrieved from "https://grandchase.fandom.com/wiki/Dark_Hierophant?oldid=61893"
Community content is available under CC-BY-SA unless otherwise noted.