from Forest of Life (Kricktria)

"God's avatar and controller of wind."

The god who created Kricktria had returned to find the world enveloped by ancient malignant spirits. He expunged the spirits from the world and then created avatars of himself to help stabilize the dimension.

And bit by bit, the existence of the avatars disappeared from the people's memories.

As one of the god's avatars, Nephilim was created to repel the malignant spirits in the forests. She uses the gentle breeze to heal her allies and like the wind, she is able to quickly move through the skies.

Because of the effects of the prana that gathered around the Tree of Life, Nephilim did not go into a deep sleep like the other avatars. Along with her followers, she continued to live in the Forest of Life.

However, due to Decanee's corruption, Nephilim lost her original form. The gentle breeze that once healed her allies turned into spheres of darkness that completely destroyed everything it touched.

Though Nephilim has become corrupt, as the god's avatar, she may still be resisting the darkness from deep within. Maybe one day if she is able to meet someone with a strong mind, she will be able to extend her gentle touch once again.

Nephilim can be fought as a boss in Act 6.9: Forest of Life, Last Day and uses her designated skills as a unit. 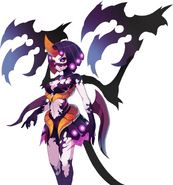 Retrieved from "https://grandchase.fandom.com/wiki/Dark_Nephilim?oldid=81463"
Community content is available under CC-BY-SA unless otherwise noted.