"The problem child of the prestigious Vampire house."

Hello. I am Baron Dmitri.

I am a Vampire, the same one you humans have been scared of since long ago. Ahh, don't worry. Contrary to popular belief, we don't just suck the blood from every prey we lay eyes on.

Vampires such as myself, who come from pure and noble blood, would never take your dreadful quality blood. We'd rather drink organic tomato juice. It's so much better for my health.

Yes, tomato juice. Don't act shocked. Blood just smells fishy and it isn't even healthy. In contrast, tomatoes are a great source of the antioxidant lycopene which can reduce the risk of heart disease and cancer. They're also a great source of vitamins. And...

Dmitri can be fought as a boss in Act 2.3: Vampires!

Dmitri utilizes the same attacks he has as a playable character. 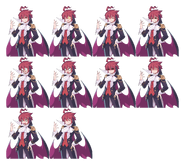 The expression system of Dmitri.

Retrieved from "https://grandchase.fandom.com/wiki/Dmitri?oldid=77185"
Community content is available under CC-BY-SA unless otherwise noted.