Dolly is the little brother of the Red Dawn Ramblin Tribe's matriarch, Viola. Though he is bright and cheerful, he tends to get scared very easily. Because of his timid personality, he grew up receiving lots of affection from his older sister.

Whether it was because of his bloodline or not, he was always a bit different compared to the other Ramblin. He showed that he had an unusual aptitude for economics. The Ramblin had managed to survive with low-profit hunting and collecting and it had never occurred to them to find a steady income or food supply.

The Ramblin Prince realized this to be an issue and proposed that all Ramblin should start working. The first business he proposed was to sell an item that they could all safely acquire, Goat's Milk.

Compared to the milk that the humans drank, Goat's Milk had better nourishment and it was something that the Ramblin could acquire cheaply and fresh. Feeling that it had a good chance of doing well and with the tribe's expectations on his shoulders, he left the village to sell the milk, but then... 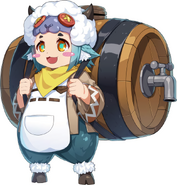 The expression system of Dolly.

Retrieved from "https://grandchase.fandom.com/wiki/Dolly?oldid=82936"
Community content is available under CC-BY-SA unless otherwise noted.