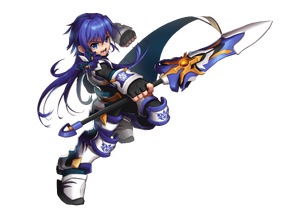 A Spell Knight is a one handed sword technician that is very strong in close combat and uses combinations of both of Spell Sword Skill and White Magic skill to vanquish his foes.

Dragon Knights weapon of choice is the Glaive that specializes in thrusting and slicing attacks. It is a balanced weapon when it comes to close quarter combat and measurable distance. It is excellent in continuous and charging attacks.

Spell Knight's magic strengthens attack power and strikes over wide areas. Ronan's magic can annihilate enemies and the Glaive's battle abilities is at best when used with a combination of magic spells. A spell knight was the one that was able to defeat the dragon, so it safe to say that the Dragon Knight is the best warrior.

With the advent of the Erudon Weapons, Dragon Knights can unleash the might of Erudon's Glaive, which allows for continous short ranged attacks, further improving their abilities to keep their opponents at bay without any chance to counterattack.

"Have you ever heard the story regarding the dragon knight? It is said that if a righteous Spell Knight defeats evil they will become stronger and turn into a Dragon Knight." 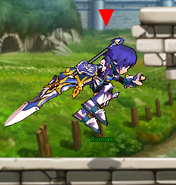 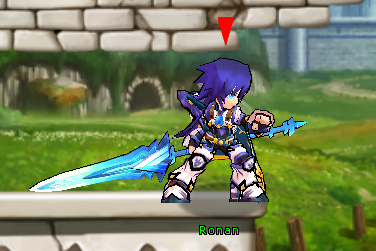 Dragon Knight's rune gauge fills itself slowly over time. Once the rune bar is completely filled, Ronan can summon Erudon's Glaive by pressing

. While Erudon's Glaive is active, Ronan retains all of his specials and his basic moveset, yet gains a 10% attack boost, two additional attacks, no cooldown for his "Dragon Dive" and "Dragon Rush" attacks, and his eyes will turn into a bright skyblue. Once the gauge is emptied, the glaive will disappear. Using a special will temporarily freeze the rune bar. Pressing

again will remove the glaive immediately. 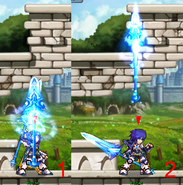 Erudon's Glaive Removal
Add a photo to this gallery 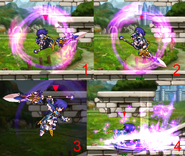 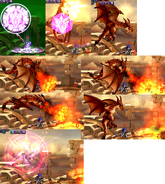 Blast Wave
Add a photo to this gallery 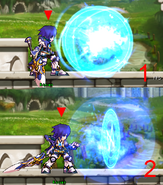 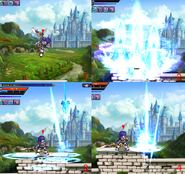 Holy Sphere's area of effect
Add a photo to this gallery

Retrieved from "https://grandchase.fandom.com/wiki/Dragon_Knight?oldid=59036"
Community content is available under CC-BY-SA unless otherwise noted.