Dreyfus de Villepin is the evil crazed artist that is fought as a boss in the Traitor's Art Room.

There is nothing else known about Dreyfus other than being an artist hired by the Frost family to paint some portraits for the manor.

Before he was poisoned by a Blood Arachnia, making him turn on her as well, the Guard Captain Schumacher warned his Lady Edel of the traitorous Dreyfus de Villepin who cursed their family.

Furious about his betrayal, Edel headed over to Dreyfus' room to confront him. Upon reaching the artist, he revealed that Edel's twin brother, Adel Frost, possessed the power to open Dimensional Portals and that the only reason he joined House Frost was to summon the demons with the Master's power. After Dreyfus claimed that Adel was then trapped in the passageway between Aernas and Elyos, as well as proclaiming himself as having become a part-demon, he engaged Edel in a fierce fight that ended in the artist's loss.

Before Edel could interrogate him, Dreyfus had spirited away into an empty portrait that disappeared.

As the Dimensional Portal vanished, Edel recalled what Dreyfus had said that Adel just got moved somewhere either in the Demon World and not killed, deciding to head to the kingdom of Serdin to seek help.

Dreyfus made his debut as an NPC in EP 6: Frostland of Edel's Likability. 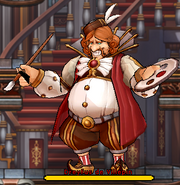