The Ramblins could not contain their excitement when they found the gigantic egg. Even if it had been shared with every ram in the Red Dawn Ramblin Tribe, they surely would have lots leftover. With dreams of eating yummy dishes made of eggs, they quickly prepared the kitchen for cooking.

Because the shell was so sturdy, they were not able to crack it. After debating on the methods of cooking, they decided to cook it in the furnace with the shell intact. As they were heating the furnace, they heard a cracking noise along with the egg's shell splitting down the middle. Huh?!

Born from inside the egg was a strange lifeform that wasn't a chicken, but not Dragon either. The Ramblin decided to call the strange creature Duchi (Dragon + chicken).

When Duchi was still young, the Ramblin would avoid him or ignore him completely because they never knew when he would turn into a wild beast but then one day...

To the Ramblins, the vampires were fear incarnate. Even the most harshly trained Ramblin would get weak in the knees when faced with vampires. However, Duchi is not a Ramblin.

"Wow! Duchi chased away the vampires!"

The vampires were nothing to Duchi who had the blood of Dragons flowing through him. Duchi chased away the vampires with a single strike and rose to become Ramblin's hero. The Ramblin cheered and thanked him. This was an emotion Duchi had never felt before.

It was then that Duchi decided, Duchi will live to protect the Ramblin. All who torment the Ramblin will be Duchi's enemy!

Duchi can be fought as a mini-boss in Act 2.6: Ramblin Sibling's Reunion.

Duchi utilizes the same attacks he has as a playable character. 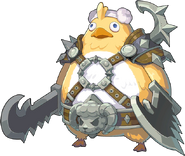 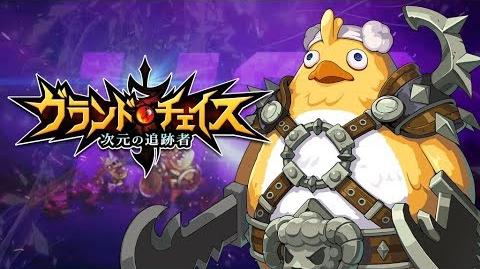 Retrieved from "https://grandchase.fandom.com/wiki/Duchi?oldid=82937"
Community content is available under CC-BY-SA unless otherwise noted.