Sieghart was once nicknamed the Duelist by his peers for his unparalleled valor and amazing skill with the sword. He was responsible for saving Bermesiah and the kingdom from evil but an even greater adversary began to encroach the land. Determined to rid Bermesiah of this evil once and for all, Sieghart began to ready himself for another adventure, discarding the comforts afforded to him by his noble status and upbringing so that he may take on monsters in his wake once again.

Dash Attacks can be combined with combo attacks and can turn and still attack while doing a Dash Attack. The Duelist's agility allows him to rise in great bounds to attack anyone above him or attack him from above. He can also make himself more aerodynamic while descending to quickly return to the ground so he can startle his enemies or get out of a sticky situation.

The Duelist can change to a Power Stance during a basic combo, Jump or Dash Attack. Using Rage with the Power Stance makes your Heavy Smash and Adrenaline Attack inflict more damage.

It is necessary to be Lv.30 to be able to participate in the 3rd Job Promotion.

"I've kept Bermesiah and the kingdom safe from the powers of darkness. But to truly defeat it I must take up the sword once again. Wanna spot me while I train?" 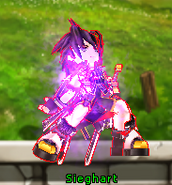 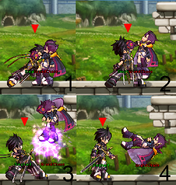 Like Rama and Mari, the Duelist has a Stance Changeability which allows him to use numerous abilities. It can be activated by pressing

during a combo, Dash Attack, or when the user performs a Rapid Descent though have to be 4 platforms down. Any higher prevents the change.

When Power Stance is initiated, the Duelist will have his 2 blades in front of him, has Hyper Armor, and crabwalks (moving slowly left or right). However, his direction facing will not change. 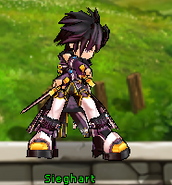 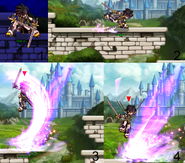 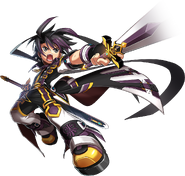