Elena was an Elder of the Violet Mage guild and the first boss of a two-part boss fight at the Kamiki's Castle.

Elena's appearance in Ellia shocked Arme. Elesis immediately attempted to kill Elena, but Arme begs for mercy, only to be convinced that she was manipulated by Kaze'aze, and must be put down.

After Elena's defeat, Kaze'aze Lass returned to the area and revived the dead mage, only to transform her into a powerful demon, Kamiki, to defeat the Chase.

Elena can use Lightning Bolt, like the Magician, and may also summon a large meteor, similar to the Battle Mage's Deep Impact, or the Black Fairy Queen's Ice Meteor, and also a spray of fire in front of her. She can also summon more Dark Anmon Scouts, replacing those that died.

Once Elena has been defeated, a message "Looks like we'll have to battle them to cross here" will appear, referring to the second phase of the battle. She then becomes the demon Kamiki, who uses more powerful magic. 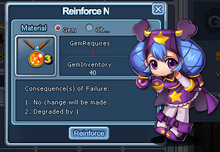 Elena is also known as the upgrader for Necklaces and Anklets, using the power of Gems or Choco'brick Bars. However, she is very infamous for her extremely low success rate and in the sense of good humor, people will go to Kamiki's Castle to kill Elena whenever she fails, downgrades or breaks necklaces and anklets for a long time.

Humorously, her Monster Card says, "I didn't mean to break your necklace..."

Elena returns in the mobile sequel as a mascot in the Summon shop. In a later update, she appears as an enchanter of equipment. Most of the time, she will be sympathetic towards the player but when the "Best" upgrade is achieved, Elena will either cry or get mad.

Humorously, Kyle during the tutorial wonders if Elena is someone that likes to break necklaces. 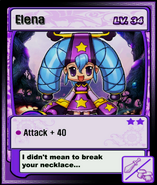 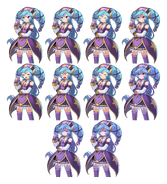 Elena in Grand Chase Dimensional Chaser.
Add a photo to this gallery

Retrieved from "https://grandchase.fandom.com/wiki/Elena?oldid=75275"
Community content is available under CC-BY-SA unless otherwise noted.