In the year 1400, Elscud Sieghart was born in Kanavan kingdom and soon after became the leader of the Ruby Knights. 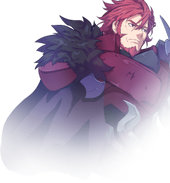 Retrieved from "https://grandchase.fandom.com/wiki/Elscud?oldid=74486"
Community content is available under CC-BY-SA unless otherwise noted.