Eryuell Island is the cradle of elven society in Bermesiah. The island was first settled in by the elf survivors from the Great Explosion of Kounat that took place at least 1500 years ago. Eryuell Island hosts the Elven Corps organization where Lire originated.

The island became a hiding spot for elves when the Kingdom War occurred. After the five-year war, some elves left to support the humans in the future uprisings.

After a long voyage, the human and elf survivors of the Great Explosion made their way to the continent of Bermesiah. The elves did not settle on the first land that they came across but instead traveled further and settled on an island away from the continent naming it "Eryuell".

Lidmir Eryuell is a young leader of Eryuell Island and Lire's older brother. He was the one who brought up his little sister after they lost their parents. Lidmir is a calm individual with a great sense of responsibility. Despite his young age, he stands as one of the major figures in Eryuell Island holding great influence over the elves.

Lire Eryuell is a member of the Elven Corps. After the elves of Eryuell Island decided to assist the humans, Lire was dispatched to join the Grand Chase and battle alongside humans to defeat Kaze'aze.

Myrielle Ariaden is a resident of the Eryuell Island and Lire's childhood friend. Unlike Lire, Myrielle was carefree and wild. Her antics often got both of them into scapes and accidents but her archery skills almost rivaled that of Lire.

Myrielle had always wanted to leave Eryuell Island but when the chance first went to Lire, she told her friend to see the rest of the world for her.

Mentioned briefly in Lire's Likability event from the sequel game, Master Vadil is the one that taught Lire spiritmanship.

Mentioned in the description of Arch Ranger's mission scroll, the Elf Elder briefly tells the story of the ocean goddess Innadril and how her scales were used to create a Great Bow.

After the elders of Eryuell Island discovered ancient weapon schematics in the Kastulle Ruins, they would develop a more powerful weapon called the Composite Bow.

Mentioned in the description of Crossbowman's mission scroll, there is an elven leader in Eryuell Island that bestows dual crossbows to those who slew monsters that are disrupting the balance of Nature.

In an alternate universe

In Vampire's story, Count Ronan was reminded of Lady Muhee of Eryuell after he drank the wine with the winemaking process of the Eryuell Island, comparing his feelings to her dancing as she gazes upon the sea. 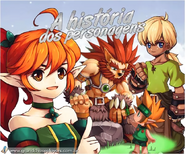