Alive
Eva is a Bounty Hunter from the Wilderness who took part in the revolution against the Underworld regime.

There is nothing else known about Eva other than being one of the assault generals in the Haros Justice Army.

Eva became very annoyed about General Russell having too much faith in Rufus and went on to say that the boy is disgracing Legis. She was also irritated by Her Highness being in the Wilderness as there will be more soldiers at the gate because of the Queen's presence. Later on, Marcus fought alongside Eva and Brady when gate soldiers poured into their village.

When Changhae came to the Gateway Base and met the Justice Army, Eva proclaimed that the area has now become their fort. She sneered at how he ran away really fast after they drove him away and his soldiers.

Eva taunted the Grand Chase on how they have to "investigate" the outsiders first whenever chaos arises. She was told by Brady to show her skill then they engaged in a battle, ultimately ending in their defeat. Brady calmed Eva down after he surrendered while she insisted to keep fighting.

Criticized by their actions, Eva argued that they hurried the plan because the invasion of Heitaros' subordinates is going to happen soon, stressing that the Queen will not fight back against the demon soldiers.

Eva can be fought as a boss alongside Brady in Act 21.3: Revolutionary Army. 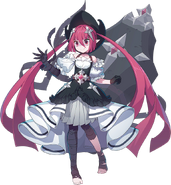 The expression system of Eva.