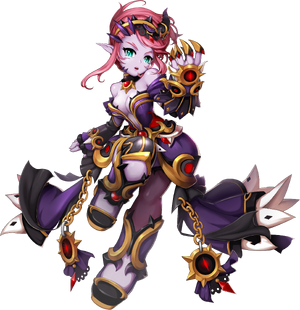 Ley finally found their first significant clue about the whereabouts of Dio Ernas in the world: she felt that the boy had increased the level of its powers and, more than that, thanks to their skills invocation, the girl realized that could asmodiano such a feat when approaching a large portal connecting the human world with his native Elyos.

Focused on finding your "worthless" childhood friend Rey headed toward where the energies emanating from the dimensional portal and so ended up going in the ruins of a forgotten kingdom. Unfortunately, when they finally arrived in Kounat, felt that the portal had been destroyed and Dio was not nearby. There were only signs of battle, showing that the Tribes Demonic beings had been there.

To the surprise of Rey, looking for any trace left by Dio, she was attacked by numerous magical creatures coming from Elyos, clearly indicating that the barriers between dimensions actually had reopened and were increasingly weak. Alone before the horde of magical creatures, the girl realized that had little chance of victory. Still, she was a Von Crimson and would never surrender. His pride and his majestic appearance in combat eventually catching the attention of one of the creatures of Elyos. His name was Haunt and he was a mischievous spirit that actually had enough power.

Haunt Rey approached and offered his help in exchange for a covenant. If the girl failed, she would die. But Rey has never been a common asmodiana. Besides having more arcane energy than normal asmodianos, she also has the lifeblood of two souls and easily managed to complete the pact with Haunt, absorbing its energy into your weapon, the  Endless .

Immediately, Rey felt his powers increasing. Not only that, but other portals between Elyos and Ernas were being opened in different regions of the world, and the lower the barrier between dimensions, the greater became the link of the girl with her ​​powers and ancestors more easily she was able to perform his invocations . Determined to face the horde of monsters, invoked his creatures, Mary Bastion, and Gargoyle Haunt, and ordered that they ended with their enemies. In a flash, all the monsters were defeated. No enemy could oppose Rey, the new Princess of Elyos

Looking down upon the remains of fallen enemies, Rey told Mary, the Hell Hound, sniffing the trail of Dio and go after him. Now they lacked little to finally be reunited!

Retrieved from "https://grandchase.fandom.com/wiki/Evoker?oldid=49158"
Community content is available under CC-BY-SA unless otherwise noted.