"The botanist with the fatal charm."

Despite growing up with a normal background from a no-name demon family, Flaune’s situation was a rare one. With his remarkable magical abilities, he became an important figure in the demon forces. Using his specialized skills in plant magic, he continued his research to become someone with outstanding battle prowess within the Demon World.

However, after realizing the difficulties of becoming successful due to his weak background, he joins under Heitaros, who had yet to receive the spotlight in the demon forces and became Decanee’s subordinate.

Though he is as confident in his appearance as he is in his talents with magic and plants, he was coldly rejected by Decanee after he tried to aggressively woo her.

Flaune can be fought as a boss in Act 10.3: Flaune's Garden and uses his designated skills as a unit. He reappears in Epilogue 2.3: Secret Garden. 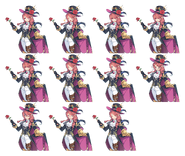 Retrieved from "https://grandchase.fandom.com/wiki/Flaune?oldid=81495"
Community content is available under CC-BY-SA unless otherwise noted.