Grand Tale
Frederick is a Kanavan Army Knight working directly under the orders of Queen Anyumena.

There is nothing else known about Frederick other than his authority over the knights in the Kanavan Kingdom.

Frederick answered Queen Anyumena that he did not want to rely on the Ruby Knights and swore to capture the traitors without their help. The Kanavan Queen then asked if the current leader of the Ruby Knights is a member of the Sieghart family and learned from Frederick that it was Gerard Farenwhite.

When he found out that Gerard and his recruits Rin, Asin, and Edel were the ones causing a disturbance inside the castle, Frederick accused the Ruby Knight of committing treason and insisted that it was a knight's responsibility to follow the Queen's orders. Gerard argued that a knight would not want the Queen to be responsible for everything which the Kanavan Knight took as an insult to his chivalry.

After his defeat, Vice appeared with Elscud Sieghart and ordered Frederick to arrest Gerard for impersonating the real leader of the Ruby Knights along with the trio.

Frederick commanded his army to get all the monsters sneaking into Kanavan, telling Gerard and his friends that they were not the only ones who think about the country.

Although he asked to let them punish the traitor Vice, Queen Kanavan had Frederick evacuate the citizens to a safe place instead, carrying out the order with complete sincerity and commitment.

Frederick can be fought as a boss in Act 25.3: Chivalry. 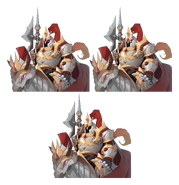 The expression system of Frederick.