Gardosen is a demon that is fought as a boss in Hell Bridge.

There is nothing else known about Gardosen other than that he was supposedly the ruler of Hell according to Elesis.

When the Grand Chase entered the pathway to Hell, they are tasked to stop a demon named Gardosen as he is attempting to cross to the material world with the help of Kaze'aze and assault Bermesiah. His voice was heard, ordering his shadowy subordinates to give them a taste of Hell.

As the Grand Chase reached Gardosen himself, he taunts the group. Ultimately, the demon is defeated and they managed to drive him back into where he came from.

Gardosen performs attacks that are similar to some of the other characters' skills. Gardosen can use Roadstar Chaser like the Dragon Knight but larger, numerous Blast Bombs like the Spell Knight in set places of the stage and can petrify the players like the Magician's Stone Curse. He can also use an air slash similar to Gaikoz and Kamiki and can teleport to another player.

Gardosen attacks with his sword as well and sometimes rushes forward to attack those in front of him.

Four of this version are fought in the Sanctum of Destruction, becoming more deadly. The Hellish Gardosen has a modified Blast Bomb where he drops it three times in a row and a modified Stone Curse where its vacuum range increases greatly. He also has two new attacks. Hellish Gardosen can shoot out a homing, reddish orb that is similar to those of the Dark Hierophant (without subtracting MP) and he can summon a dark vortex which is identical to Druid's Bloody Funeral but without the totems and no HP gain, drawing his enemies into it which deals maximum damage (99,999) and instantly annihilating players once the attack has finished.

Hellish Gardosen is encountered once again in the Tower of Disappearance. 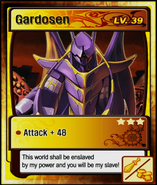 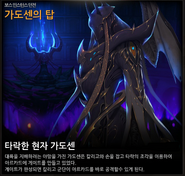 Gardosen in AIMA.
Add a photo to this gallery

Guild Boss summon cut-in.
Add a photo to this gallery

Retrieved from "https://grandchase.fandom.com/wiki/Gardosen?oldid=78004"
Community content is available under CC-BY-SA unless otherwise noted.