from Gorge of Oath

The Giant Drillmon is a creature that is fought as a boss in Gorge of Oath.

There is nothing else known about the Giant Drillmon other than that it supposedly never comes out into the daylight if it can help it.

When Arme asked Elesis if the Ruby Knights were acquainted with the Kanavan Royal Guard, they were soon interrupted by a Giant Drillmon who was defeated shortly.

The Giant Drillmon has several different attacks. The first one is an attack similar to that of a common Drillmon. The Giant Drillmon uses its horn on the rear to attack players however it can rush across the entire room doing so. Then it has a drilling attack that hits anything around the drill and rocks fly out of it at different angles. Lastly, the Giant Drillmon can drop a ball of massive energy which does great damage in contact.

In Grand Chase Dimensional Chaser, the Shadow Drillmon is an Assault-type boss fought in Act 25.6: Evil Spirit Eroded with Soul. It has the same appearance as the Giant Drillmon from the Gorge of Oath but instead has parts of its body seemingly corrupted. 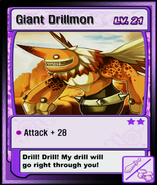 Retrieved from "https://grandchase.fandom.com/wiki/Giant_Drillmon?oldid=82010"
Community content is available under CC-BY-SA unless otherwise noted.