The Gladius (also known as Gladiator Blade) is a weapon utilized by Sieghart for his Gladiator job in Grand Chase. It is a sword that he wields when attacking.

The Gladius held by Sieghart, in particular, was crafted by a famous blacksmith. With years of use, he felt like the blade became an extension of his body and claims that it is the sword that brings out his full potential thus becoming a legend with the genius Gladiator. 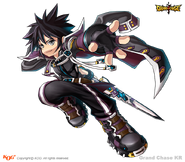 Sieghart's blade as an Exclusive Equipment in Grand Chase Dimensional Chaser.
Add a photo to this gallery

Retrieved from "https://grandchase.fandom.com/wiki/Gladius?oldid=79177"
Community content is available under CC-BY-SA unless otherwise noted.