Kassias Grandiel is the boss of the Wizard's Labyrinth and wields a clone of the Klara Libri. He was once one of the most powerful sorcerers of Zeruel and served as an adviser to one of the earliest Elven Kings.

In the past, Kassias Grandiel was somehow in possession of the Klara Libri clone and sensed dark energy enveloping his old friend, Baldinar. Thanks to his suspicions, he managed to escape the Great Explosion that annihilated Kounat.

Grandiel witnessed the surviving elves decaying into savagery while engaging the dwarves in war, certain that they were responsible for the death of the Elven king. However, he never ceased to think that in fact, it was Baldinar who was responsible. Disgusted by the increasing conflict, Grandiel locked himself in his magic tower. There, he remained out of sight until one day he rediscovered energy that he knew very well. The aura helped Grandiel find Baldinar, who was still very much alive in the form of Ashtaroth, as well as the group of young heroes fighting him.

Kassias Grandiel would go on to assist Grand Chase, teleporting them to his magic tower and forcing them to fight insanely powerful illusions of monsters they had fought in the past as an attempt to strengthen them against Ashtaroth. They were not pleased with this, as it was completely unexpected and random, and that Kassias kept his plan a secret until the very end.

Later, while the Grand Chase engaged in the battle against Ashtaroth, Kassias Grandiel opened a Dimensional Portal that led to the Monster Train 301 as an attempt to save the soul of their recently deceased friend, Harpe, while holding off Ashtaroth the best he could.

Later, after Ashtaroth resurrected the Highlander leader Graham and forced him to fight Grand Chase, Grandiel arrived and used the clone of Klara Libri to defeat him, but regretfully informed Sieghart that Graham and the Highlanders could not be saved.

Surprised by Grand Chase's strength, Ashtaroth realized that it could only have been accomplished with Grandiel's training in the Wizard's Labyrinth.

Grandiel then showed up and revealed his relationship with Baldinar. The elf tried to convince his old friend to stop, but Ashtaroth ignored him and used the incomplete Aernas Hammer to transform into a god. Grandiel informed the Grand Chase that their attacks were useless against Ashtaroth and only Klara Libri's clone could harm him. He proceeded to create a barrier that nulled all of his attacks.

Upon Ashtaroth's defeat, the Aernas Hammer suddenly warped its key, Mari, to the field. Afterward, Duel appeared to deny Ashtaroth the key. Kassias Grandiel then took advantage of this moment to seal himself, Ashtaroth, and the Aernas Hammer into the Wizard's Labyrinth where they would be trapped for all eternity, but not before wishing the Grand Chase farewell.

As a boss, Grandiel excels in magical attacks centralizing around lightning and illusions. His basic attacks include conjuring streams of lightning down on his foes and releasing a large, slow-moving lightning ball that homes in on his targets. He is also capable of summoning a circular array of lightning orbs that spread out from their point of origin.

When fighting Kassias, he also summons an illusion of Drawl and Veron, and 4 clones of himself after they have fallen, to assist him in battle. He cannot be damaged while Drawl and Veron are alive, and his clones can use all the attacks he can, though they have less HP than the original. 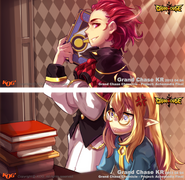