The grimoire or manual is a weapon utilized by Mari for her Rune Caster job in Grand Chase. It is a magical tome that can assist with the conjuration and control weapons and machines such as machinery crates, cannons, and the Wing Drive Weapon or simply W.D.W.

It is also an Epic-type item that can be obtained from the Shop.

The Rune Casters of Kounat used grimoires in researching new tools and improving their technology at the time. The manual contains everything about the ancient kingdom's magic engineering. 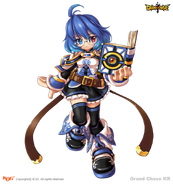 Mari's manual as an Exclusive Equipment in Grand Chase Dimensional Chaser.
Add a photo to this gallery

Retrieved from "https://grandchase.fandom.com/wiki/Grimoire?oldid=79039"
Community content is available under CC-BY-SA unless otherwise noted.