The Rune Casters of Kounat displayed much power and influence during the First Demon War and invested a great amount of magical and mechanical resources. However as the war drew on, they realized it was going to be impossible to sustain their efforts for much longer. To solve this problem, the most esteemed Rune Caster in the kingdom, Jean-Sanque Gulio, invented a powered gun designed to fire magical rounds while conserving the operator's energy. The elite legion trained to use this weapon was called the Gunslingers. The weapon proved to be a success. The First Demon War ended with the surrender of the demons.

However, Kounat came to an untimely end with a mysterious explosion. The secrets of the Maverick and the secrets of building them were lost forever. It is believed by scholars that the rifles used today by the dwarves of Archimedia are based on the ancient design of the Maverick.

As a Gunslinger, Mari has a variety of unique magic and machines at her disposal that can induce enemies to walk right into thermal traps, allowing for effective mid-distance attacks. The Gunslinger's Triple Missiles attack compensates for the fact she has a weak long-distance attack by enhancing the Maverick's inherent strengths. Mari continues to use the Rune Caster's Mana Shield and Dash Jump. However, the Gunslinger's version is stronger than that of the Rune Caster's who has always been weak when it came to close-quarter combat and the summoned W.D.W. has also been enhanced. Gunslinger's many skills can be confusing at first but with practice and training, Mari is a force to be reckoned with on the battlefield.

Displayed below the MP gauge is a bar that may seem similar to the charging meter used by Jin and Sieghart at first. However, using eight consecutive shots from the Maverick will fill the gauge and "overheat" the gun, preventing Mari from firing for 7 seconds. 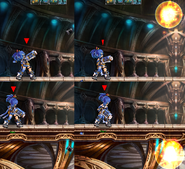 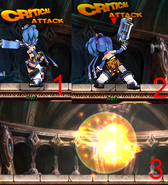 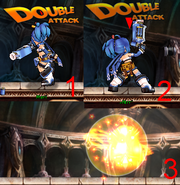 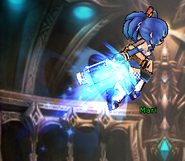 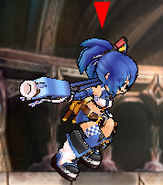 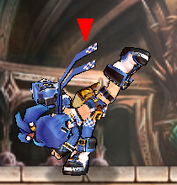 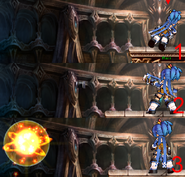 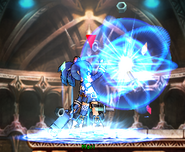 Summon W.D.W.
Add a photo to this gallery

The Wing Drive Weapon or simply W.D.W. is an array of blades that follow behind Mari and improve her attacks. The blades are usable for 20 seconds after which they will disappear.

TIP: Regardless of the Maverick overheating, the W.D.W. can continue shooting its beams and performing its swift attacks. 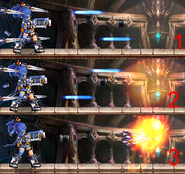 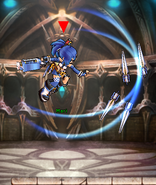 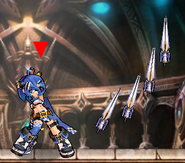 Dash Attack
Add a photo to this gallery 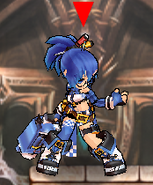 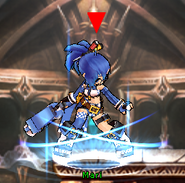 Freezing Bullet
Add a photo to this gallery 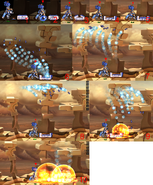 Ultimate Weapon
Add a photo to this gallery

Retrieved from "https://grandchase.fandom.com/wiki/Gunslinger?oldid=78802"
Community content is available under CC-BY-SA unless otherwise noted.