My name is Marjoram. I am an undead sorcerer, who at one time had a promising future. I had signed a contract because I was told that I would be managing elite soldiers, but I was tricked and left with a disorderly bunch.

Now, you must be wondering why I am appearing in Hanout's introduction. That is because I have something that must be said.

Honestly, this place is just bizarre. Just downright weird. You know, I was willing to look over the fact that I have idiot lifeforms as my equals or that the subordinates that they put under me are beasts like a snake or cat... However, the one thing I cannot comprehend is these bizarre siblings.

In the case of the younger brother, he looks completely normal from the outside. No, he's far from normal. This guy has it all. Along with his model-like height and his good looks, he has an amazing ability called Absolute Zero. To top it off he has the arrogance and impudence to look down on all other beings other than demons. He is the ideal demon.

But the strangest thing happens when he sees his sister. He just becomes a shell of his former self. He just stands there wriggling like a worm and then cries when she says something to him.

So then one time after his sister gave him a mouthful, he was standing there crying as usual. I decided to go over and just quietly asked him what was up with their relationship for him to just always take a beating, and then...

"How dare you speak like that about my sister? Do you want me to send you to Hell?"

Can you believe it? That's what he says to me. Did I say something wrong? And at least say it after wiping your tears. I mean, this guy was trying to act all cool saying something like that with tears rolling down his eyes... Ah, just thinking about it makes me mad... I was trying to be on his side, not his sister's. And then all of a sudden he tells me not to tell anyone about what happened. Fufu... There is not a single person in our forces that don't know this story...

Anyway, these siblings are weird. It looks like I must continue to research them.

Hanout can be fought as a boss in Act 7.3: Crisis Vigilante. He reappears with Rasel as mini-bosses in Act 7.9: The Final Battle and in the final wave of Epilogue 1.2: Trap.

Hanout utilizes the same attacks he has as a playable character. 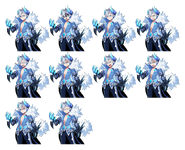 The expression system of Hanout. 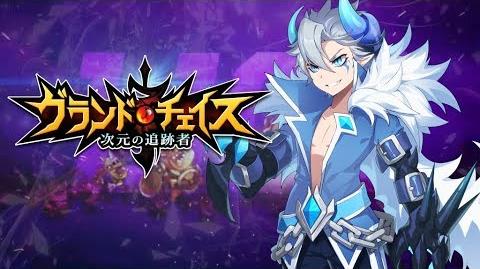 Retrieved from "https://grandchase.fandom.com/wiki/Hanout?oldid=81500"
Community content is available under CC-BY-SA unless otherwise noted.